Lower volumes in the market this season could boost a market already buoyed by demand for high-quality, ready-to-eat fruit 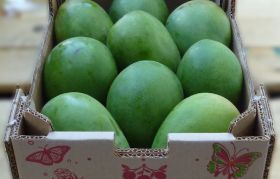 Smaller volumes and growing demand are expected to create good market conditions for mango marketers in Europe over the next few months, according to leading suppliers in Israel.

While Israel itself is expecting a smaller than usual crop as a result of adverse winter weather, increasing demand from the retail sector – in particular within the high-quality, ready-to-eat segment – is reportedly contributing to growth in the mango business.

“The smaller quantities of mango expected from Spain this year will be to Israel’s advantage,” says Nir Harel, mango product manager at Galilee Export.

As the country’s export season gets underway, last winter’s very low temperatures means that a significant number of plantations have lost a certain proportion of their crops and so last season’s heavy yields will not be repeated.

After very mediocre yields in 2013, growers took advantage of favourable conditions in winter 2013/14 to generate heavy yields – around 30-50 tonnes per hectare – in most production areas.

With planted area also growing and new production from several young orchards coming online, large quantities of fruit presented serious problems for those marketing the fruit in both local and export markets.

On-going political unrest and fighting last summer also closed off the important Palestinian market to Israeli mangoes, while unfavourable movement in the Israeli shekel’s rate against European currencies served to exacerbate those problems.

Despite the pessimistic yield forecasts, Galilee Export says its export volumes will rise in 2015 as more growers of quality mangoes sign up to sell their fruit through the company.

The group’s export volume is estimated at 3,500 tonnes, with the average weight per fruit thought to be slightly lower than last season, but still within the standard size range.

Galilee is also focused on adding new markets. This season, its mangoes will reach both western and eastern Europe, including the UK and Russia, as well as South Africa, Canada and east Asia.

Israel’s largest exporter, meanwhile, is Miriam Shoham, a private family-owned company closely involved in all aspects of production – from planting, through cultivation, harvesting and packing to shipping and marketing.

The company’s packhouse near the Sea of Galilee in the north of Israel is one of the largest of its kind in the world for mangoes, with an area of 13,000m2 at ground level.

Owner Menachem Shoham expects a reduced yield this season. “We had a stormy winter and two days in the middle of May with exceptionally high temperatures could result in 20 per cent less yield,” he explains.

Nevertheless, Shoham leads the market with an estimated production of 13,500 tonnes, 80 per cent of which will be exported.

The business is also widening its circle of consumers, especially among supermarkets and the niche market for high-quality, fresh-cut fruit.

Today, the area of mango cultivated in Israel is around 1,600ha, and the major production areas are in the Jordan Rift Valley, both around the Sea of Galilee and in the Beit Sha’an area.

Moves to develop mango production in southern Israel’s Arava Valley, from the Dead Sea to Eilat, have focused on the Shelly variety, although the salinity of the available irrigation water does pose a potential problem.

Thought is therefore being given to introducing desalination units close to water sources.

At present, R&D efforts are centred on post-harvest treatments for mangoes and on improved, greener methods of plant protection that use pest-monitoring systems. Work also continues on the introduction of new varieties.