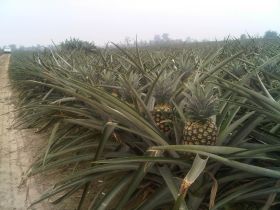 Migrant workers "were underage and underpaid", British activist Andy Hall said while defending himself as a witness in a defamation case filed by global pineapple supplier Natural Fruit Co about employees at its factory in Prachuap Khiri Khan, in Thailand.

According to the Bangkok Post, Hall, commissioned by Finnish labour rights group Finnwatch in 2012 to research labour conditions at Natural Fruit and two other Thai exporters, told the Southern Bangkok Criminal Court (2 June) that information for the report was obtained through interviewing about a dozen migrant labourers at Natural Fruit in a safehouse in the province.

One of the labourers was a 15-year-old girl who had worked there for two years,the tribunal heard, meaning the company had hired an underaged worker. "They entered Thailand illegally and worked at the firm through brokers. If the workers had problems in town such as lacking work permits or ID cards, they would simply say they work for the 'MP's factory'," Hall said.

The workers received their wages according to their legal status, but below the then legal minimum wage of 240 baht (£4.71). They weren't paid overtime, nor given holidays, the Post reported.

Last month, a Natural Fruit executive told the court as a prosecution witness that Hall supplied false information about the company's labour record, hitting its reputation and exports.

Natural Fruit is ranked in the world's top 10 exporters of canned pineapple and juice. It filed two criminal and two civil lawsuits against Hall in 2013. The most serious of the charges is violating the Computer Crimes Act. If convicted, he faces up to seven years in prison. Natural Fruit also has sought 300 million baht (£5.9m) in damages.