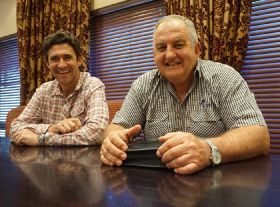 South African group Dutoit Agri has revealed plans to continue expanding its business by investing in products for which international demand is rising, such as blueberries, cherries and sweet potatoes.

The exporter, which is known primarily within the industry as one of the country’s leading suppliers of apples, pears and stonefruit, has an annual revenue and says it is aiming to double that figure within five years.

Speaking to Eurofruit at the company’s head office in Ceres, Western Cape, managing director Gys du Toit explained that diversification and innovation were essential for the family-owned business, which produces, packs and markets all of its own fruit and vegetables.

At the same time, its recent success has been derived not only from that core business but from other divisions that, for example, operate coldstores or manufacture wooden bins for transporting harvested fruit.

“We are in a very good position strategically because we believe that new product lines and cultivars are the future,” Du Toit commented.

The group recently embarked on a commercial trial for blueberries on a 5ha site under nets in the Langkloof Valley, part of a joint venture with United Exports.

“We needed a higher-value product in the Eastern Cape and we identified a specific farm with the perfect climate for blueberries. We expect the first fruit to be harvested in August,” Du Toit revealed.

The group is also innovating with investments in sweet potato production and in cherries too, where it is pressing ahead to expanding its production area for low-chill varieties.

According to marketing director Gysbert du Toit, these varieties are “changing the whole cherry scene” in South Africa by enabling the group to supply the fruit from mid-October until mid-January.

In commercial terms, that means it can therefore target a lucrative early market leading up to the Christmas marketing window.

“We are now confident we know how to grow these varieties and we have around 60ha reaching maturity. We’ve got the cooling and packing infrastructure and the next step is to increase the volume of fruit,” he said.

“We’re excited because we see premium markets in the UK and Asia, for example, using seafreight complemented by airfreight.”