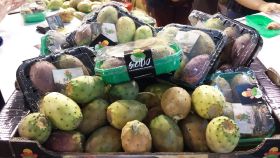 This weeks’s Macfrut exhibition in Rimini, Italy, saw the launch of a major new branding initiative designed to raise the profile of prickly pears – sometimes known as Indian fig – grown in the area around Catania in Sicily.

The brand, Sicilio, is the brainchild of producer organisation La Deliziosa, which has high hopes that one of Europe’s most distinctive fruits – but also one of the least well known outside of the Mediterranean itself – can make a leap into the mainstream and thus secure its own place in the wider European fresh produce market.

“We wanted to create a project that bridged the gap historically created around a product that for too long has been considered a just a local speciality typical to southern Italy,” explained Salvatore Bua, who co-founded the project with his brothers Giovanni and Antonino.

He added: “We want anyone who comes across our prickly pears already to anticipate the flavour with their eyes.”