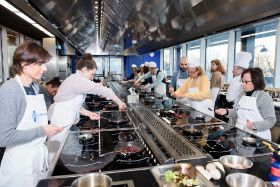 International Green Week was once again the focus of the Chilean Blueberry Committee’s marketing efforts in Germany. On Friday, blueberries took centre stage at the Asoex/ProChile stand at the fair in Berlin, where international chef Ricardo González was on hand to prepare innovative recipes demonstrating their versatility as an ingredient in savoury and sweet dishes.

At 1kg per capita, Germany leads the way when it comes to European blueberry consumption, far outpacing other markets such as the UK.

“Germany is a big consumer of blueberries and we see huge potential to further increase consumption and reinforce Chile’s position as the Southern Hemisphere’s number one exporter of this product,” said Diego Torres, commercial director of ProChile in Berlin, who attended the event with Chile’s ambassador to Germany Patricio Pradel.

In Paris, the CBC, ProChile and Asoex held a culinary workshop at the world famous Le Cordon Blue cookery school, inviting a group of journalists and bloggers to join Michelin-starred chef Philippe Groult in the preparation of two blueberry-inspired recipes.

The workshop forms part of the CBC’s 2016/17 campaign in France which seeks to stimulate on consumer demand by building on last year’s promotional activities with an extensive programme of in-store tastings and demonstrations with major retailers including Monoprix, Casino, Auchan and Carrefour.

The CBC is also carrying out consumer promotions in the UK, Scandinavia, Italy and Spain.

According to CBC director Andrés Armstrong, the 2016/17 campaign has seen an unprecedentedly high volume of blueberries being exported during the early weeks, with weekly volumes reaching a record 10,500 tonnes in week 48.

Together with the sharp rise in Peruvian and Mexican exports, this has put considerable pressure on prices in the US and other markets.

“In spite of the promotional efforts of our sales agents, the CBC and US Blueberry Council, the impact of the higher volumes in the first third of our season are being felt in the form of lower prices,” Armstrong said, adding that this would be a “challenging and tight season that will test our competitiveness like never before”.