With rising output taking it toll on prices, timing and quality are becoming more important than ever to the success or failure of the season 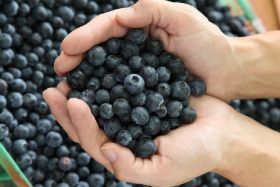 Latin American blueberry suppliers have faced a rude wake-up call this season. A surge in Peruvian and Mexican production coupled with the unusually early Chilean deal created a glut in the market early on, setting the scene for what has proved to be a challenging campaign.

Argentina has borne the brunt of the production increase, with many growers struggling to break even last year when exports reached a record 17,100 tonnes. In spite of homing in on the lucrative early window (the vast majority of blueberries are now airfreighted), Argentina faces a major cost disadvantage compared to Peru.

“We’re trapped: Peru’s production costs are US$0.40 compared with ours of more than US$2,” Argentine Blueberry Committee president Carlos Stabile said in a recent interview with Télam.

Chile, meanwhile, has had to contend with an unexpectedly early crop that caught exporters by surprise. “Every season is different but this one has been completely out of the ordinary,” says the Chilean Blueberry Committee’s Andrés Armstrong. “The season started four weeks earlier than usual meaning that a lot of fruit hit the market before our promotional activities had got underway. The total weekly volume during peak weeks was the same as last season but it arrived when the market wasn't ready for it.”

The worst price falls were in the US, Chile’s principle market absorbing around 69 per cent of its export volume. The picture in Asia, however, has been somewhat brighter. “Even though this is where we have seen the biggest rise in shipments the Asian market has held up pretty well, but we do expect to see a downward adjustment in prices during the whole season due to the higher volume,” he says.

Weekly volumes will fall progressively in what remains of the season, partly because of the precipitated start but also because a number of producers have wrapped up early in the face of the wild fires that swept through south central regions at the start of the year.

Armstrong is under no illusions as to what the future holds for Chile and the blueberry industry in general. While demand continues to rise across virtually every region – even mature markets like the US saw per capita consumption grow by 50 per cent between 2000 and 2015 – the market is becoming more crowded every year. Chile is being squeezed at either end of its season and this will only intensify in future.

“This is a very dynamic industry and you have to be prepared for change,” notes Armstrong. “It’s a given that supplies from other countries will continue to rise, particularly during the beginning and end of our season, and this will clearly affect prices and also the timing of our promotions. We don’t foresee, however, the atypically premature start we experienced this season, which compounded the situation.”