True cost accounting has received royal support in the UK, as Prince Charles congratulates Eosta on its efforts to calculate the real cost of food 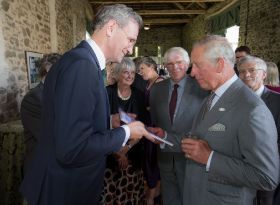 The UK’s Prince Charles has praised organics specialist Eosta on a groundbreaking report into the ‘true cost’ of producing organic compared with conventional products, which concluded that the former is significantly cheaper when all costs are taken into account.

Including their impact on health, climate, water quality and soil erosion, organic apples were found to be €0.19 (£0.17) cheaper per kilo than their conventional counterparts.

Eosta presented the results of its innovative ‘True Cost Accounting in Farming and Finance’ pilot programme at last week’s Harmony in Food and Farming Conference in Wales.

The programme builds on the Prince’s Accounting for Sustainability Project, which was established in 2004. At the conference, Prince Charles argued for a more inclusive approach “in the way our entire economy is geared”, warning against looking solely at the bottom line.

Back in December 2013, Prince Charles was already showing his support for true cost accounting. “It is the economic invisibility of nature that is the root of the problem,” he said then. “We should include the true cost in the bottom line of our profit calculation, rather than exclude them.”

Eosta’s pilot aims to do just that, helping farmers, food companies and financial institutions to monetise the hidden impacts of modern farming practices on people and planet.

The True Cost Accounting pilot calculated the cost of several of Eosta’s products, including organic apples from Argentina and organic oranges from South Africa, and compared them with non-organic products. The report also included an integrated profit and loss statement for Eosta, one of the first to be published for an SME company worldwide.

Eosta CEO Volkert Engelsman commented: “We have found large differences between the impacts of organic and conventional production. For example, the calculation shows a 19 eurocents per kilo advantage for organic apples in health impact. The report makes clear that organic food is not too expensive, but rather conventional food is too cheap.”