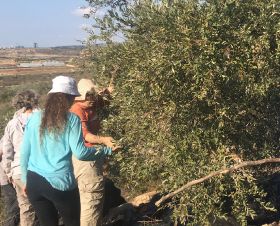 Until around ten years ago, I used to sit back and nod approvingly at news of fellow Israelis cooperating with Palestinian farmers during the olive harvest.

A coalition of fringe NGOs on the left, including Peace Now, Rabbis For Peace and Lawyers For Justice, assist Palestinian farmers each season in picking the olive crop.

Such actions are largely symbolic, helping in a small way to adjust for some of the unbalanced and unjustified actions of successive elected Israeli governments, both left and right.

Since, in some places, the government moved its provisional border with Palestine up to 5km east of the Green Line (the pre-1967 border), a large number of Palestinian farmers have found themselves cut off from their land and livelihoods.

Arguments can be made as to the need for such a border, which comes in the form of a wall and/or a fence, in combating terrorism and in saving Israeli lives, but indications point to the wall’s effectiveness.

However, the impact on affected farmers has been severe. They require licenses to pass through the fence for work, often demanding a three-hour trip each way for what was formerly a seven-minute walk to their fields and groves.

Licenses are given only to farmers with over 4 dunam (0.4ha) of land, so there are times when the olives are left to rot on the trees due to a lack of labour.

Over the last ten years, at least twice a season, I make an effort to join a motley crew of Israelis to help save the olive harvest. Usually there are 20-40 Israelis in each group. In my experience, at least 30 per cent are aged 80 years or more. We are transported from Israel by bus, the cost of which is covered by on-the-spot donations from those participating.

At the end of the day, we wait to load the full sacks of olives to be shipped. According to the Palestinian farmers, if sacks are left in the field, settlers sometimes come to cut them open, spilling the fruit onto the fields. In addition, we frequently hear news of settlers cutting down and burning olive trees, but little is done by the authorities to stop this.

Inevitably, assistance is mostly offered in olive groves close to the border, whether north or south. Last month, we worked on the hazardous sloping fields of Jayus, a village close to the Eyal Crossing Point, east of the West Bank town of Qalqilya.