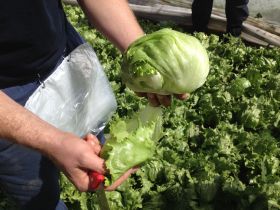 He said Jepco is aiming to grow by exporting more to Europe, beyond France, Belgium, Netherlands and Scandanavia.

Yet he shrugged off any suggestion that the Brexit process will hinder his efforts to expand, particularly in respect of widely documented recruitment problems for growers.

The National Union of Farmers submitted evidence to a Parliament select committee last week which said 13% of growers suffered "significant shortages" of workers.

The industry is calling on environment and food minister Michael Gove to commit to a seasonal workers scheme to guarantee foreign labour supply.

“Everybody is talking about the issues of labour but we have a plan, and we’re sticking to our plan, it seems to be working," Padoan said at Fruit Logistica, in Berlin.

“We’re getting a decent amount of interest in what we’re doing and the repeats in terms of people coming back to our business will be high.

“Everybody has their own issues but we have put some stuff together which seems to be working for us and I’m quite pleased with how that’s progressing.”

He added the company has been successful in their latest venture, entering the baby leaf market in 2017 and have already sold out their crops for the year.

“The development of the baby leaf is very important for us. This year we have some solid plans around baby leaf which seems to be working extremely well, we have virtually sold our baby leaf crop for the whole year.

“We are now looking at whether we need to find a way to get some more.”