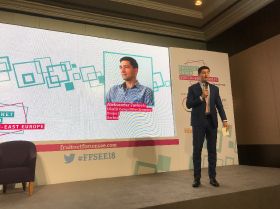 There are clear opportunities for fruit and vegetable producers in south-east Europe as exports continue to rise.

That was one of the key messages from the opening session at the 2018 Fruitnet Forum South-East Europe in Belgrade today (21 November), where over 100 delegates gathered to discuss the present and future of trade in the region.

Wayne Prowse from Fresh Intelligence Consulting pointed out that fruit exports from south-east Europe are rising by 5.7 per cent per year, and reached 2.8 million tonnes last year. In the last ten years there has been a particular growth in exports of pears (+13.9 per cent), apples (+13.3 per cent), kiwifruit (+12.1 per cent) and stonefruit (+8.2 per cent), with all major fruit categories showing some sort of increase over that period.

South-east Europe’s big advantages are in early-season cherries and stonefruit, he added, with western Europe and Russia the big destinations. However despite the growth in exports, south-east Europe remains a net importer of fruit, with 2.8mt.

Paco Borras, a consultant for Anecoop in Spain, outlined changing retail trends across the continent, observing that while in central and south-west Europe it is local supermarket chains who lead their respective markets, in eastern Europe it is major multinational groups who have the biggest share.

More specifically, in south-east Europe it’s a mixed bag, with local chains taking top spot in Bosnia, Albania, Macedonia and Montenegro and international groups such as Ahold Delhaize leading in Bosnia and Greece.

Borras also predicted blockchain will have a bigger influence on the market going forward as major players such as Walmart and Carrefour invest in systems that give them full visibility across the supply chain.

Meanwhile Aleksandar Pavlovic from USAID pointed out that the Serbian export trade barely gets over $1,000 per hectare for its crops, mainly due to the fact that much of its exports go through processing channels rather than fresh. He challenged Serbia to catch up with the rest of the EU when it comes to putting the focus on fresh exports.