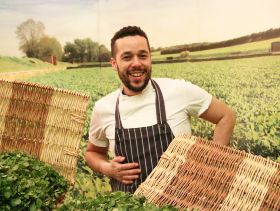 The Watercress Challenge, launched earlier this year by the AHDB and The Watercress Association, aims to inspire more people to eat the British heritage veg, including an Instagram campaign designed to target younger shoppers.

Tom Amery from The Watercress Association said: “As one of the UK watercress growers attending the event, we were delighted to be able to represent a crop with such a long heritage that offers so much culinary diversity. To have so many accomplished chefs working with watercress was a delight and the response on the night was outstanding.”

Dubbed the #WatercressChallenge online, the Watercress Challenge is the first time the AHDB has led a horticulture campaign, with the group calling it a “great success” having reached a higher number of consumers.

Nicola Dodd, AHDB marketing manager said: “I was bowled over by the passion and dedication of the chefs, and the fantastic response from all who attended.  People were amazed at how one ingredient can be carried through in so many dishes, and how well watercress paired with so many flavours”.

Eddie, a freelance chef and owner of private dining and pop-up business Kilty & Co added: “I was asked to take part in the #WatercressChallenge and it was a great privilege to be involved in such a fantastic event to support the farmers and producers with this fantastic ingredient.”