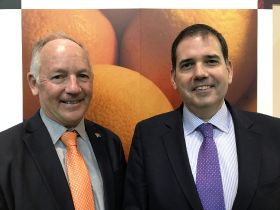 Representatives from Argentina, Chile, Italy, Morocco and Peru were present alongside Chadwick and García to explore how such an organisation might work at a special meeting held on the first morning of the Fruit Attraction trade fair.

• Discuss common issues affecting citrus producing countries.
• Exchange information on production and market trends to prepare for the next decade to come.
• Foster dialogue on policy issues of common concern.
• Identify and promote Research and Innovation projects specific to the citrus sector.
• Liaise with public and private stakeholders on citrus-related matters to highlight the importance of citrus producers and the need for a fair return.
• Promote the global consumption of citrus.

"It is important that the world citrus community works together to face common challenges and learn from each other," he said, adding that, leaving aside the competitive factor, it was essential to share information and experiences for the collective benefit of the sector, which is of key strategic importance for Murcia and for Spain.