Online data reveals the success in raising awareness of horticultural labour shortages, due to the coronavirus pandemic 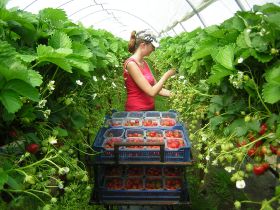 Online job searches for fruit picking were more than twice as frequent as NHS volunteer job searches during lockdown, with a whopping 843 per cent increase since the start of the lockdown period.

Searches for “fruit picking jobs” rocketed 843 per cent between March 23rd and May 15th this year, as millions of Brits have either lost jobs or were placed on furlough due to the nationwide lockdown imposed by Boris Johnson.

Trailing far behind fruit picking job searches were “NHS Volunteer Jobs” with a 355 per cent search increase, and “Online Tutoring Jobs” at 67 per cent.

Delivery work has also seen a large uptake in recruitment since the start of the pandemic, with Tesco delivery job searches increasing by 128 per cent and Asda delivery jobs searches up 117 per cent.

According to Debut, general searches for ‘farm jobs’ have also risen by 21 per cent too.

With over 90 per cent of seasonal agricultural workers emigrating from Eastern Europe each year to pick British crops, travel restrictions have brought British production to the brink of an unprecedented crisis.

Yet job sites launched by industry and government have managed to recruit enough workers from home and abroad to keep operational roles filled for now, although fears remain as Britain’s peak soft fruit season approaches.

All search increases were calculated using Google Trends data, which normalise search interest on a scale of 0-100, with 100 representing the peak searches over a period and the other figures relative to this.