Change was a recurring theme at the recent Eurofruit Congress Middle East in Dubai, both as a result of evolving consumer preferences and the Arab Spring 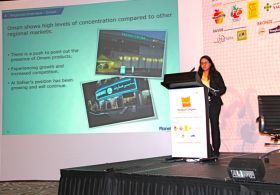 The annual Eurofruit Congress Middle East took place on 24-25 September, welcoming delegates to the Intercontinental Hotel in Dubai to engage in discussions on topics as diverse as the changes occurring in the region's retail sector, food preservation, marketing and new sources of supply.

This year's congress was held alongside the WOP (World of Perishables) Dubai exhibition, which took place at the Airport Expo over the three following days.

Opening the congress was Manu Ghai of UK-based Planet Retail, who explained the emergence of the Middle East as a key growth market for retailers, citing the increasing preference of local consumers for high quality produce and the rise in consumer spending in places like the UAE.

The latter revealed that Géant Hypermarkets was planning to focus future store openings on its convenience store format as opposed to its traditional hypermarket format, in order to reduce risk and to boost sales of convenience foods and juices.

The congress also featured presentations on marketing strategies in the region, courtesy of Raquel Herce of Spanish company Mint and Simon Bakht of Lebanon-based AMFI, and new sources of supply, from Bostjan Kozole of Slovenian apple producer Evrosad and Alejandro Moralejo of Argentinian lemon group All Lemon.

The congress ended with a look at how the region's fruit and vegetable trade had been affected by the recent Arab Spring, with a particular focus on the impact of the Egyptian revolution.

"We need to lead the change," he stated, "not follow it."

Hadi Abuseedo of Dubai-based Abuseedo Trading highlighted the Arab Spring's impact on payment structures in the region and suggested that it had persuaded more companies to seek to ship more produce direct to markets in the Middle East rather than via Dubai.