Suppliers set on growth in Gulf 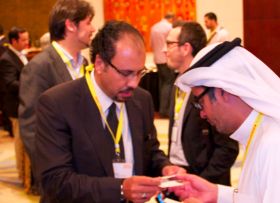 The Middle East region is more attractive than ever to overseas suppliers of fruit and vegetables. This was one of the key messages to come out of this week's Eurofruit Congress Middle East, the region's leading fresh produce conference, which welcomed 120 delegates in Dubai from 25 countries.

Exporters in the likes of Italy, Jordan, Portugal and Latin America are determined to boost volumes to the region, drawn by the young, growing population, rising incomes and increasing quality standards.

Adolfo Storni, business development director at Univeg, which is opening a sales office in Dubai next year, said that the Middle East presented a big opportunity for Southern Hemisphere fruit as exports to the EU decline.

"Univeg is focusing on the Middle East market for fresh produce from South Africa, Chile, Turkey, Spain and Italy," he told delegates. "We are also developing a strong business in North Africa, in countries like Algeria and Libya. As we become more global and less European, the Middle East is a big opportunity."

The congress equally explored the importance of branding in the region. According to Del Monte's Virginie De Beco, branding is one of the main differences between market leaders and market followers in the Middle East.

"The challenge is to deliver a message that is culturally relevant given the divergences in the Middle East's varied markets," she said. "We sell differentated products to these very different markets, and what holds everything together is the brand. What's important is that any products that carry the brand offer the same level of quality, and this creates loyalty."

De Beco also stressed the importance of social media in gaining feedback from the target consumer. "It allows us to get closer to the voice of the consumer to improve how we do business," she said.

Delegates heard that the principal challenge facing most suppliers to the region remained transportation, with freight rate increases leading to higher costs and slow steaming adding to journey times.

However, in his opening address Mahmood Al Bastaki, chief executive of trade facilitation body Dubai Trade, highlighted the efforts being made by the Dubai government to maximise efficiency.

He referenced the World Bank's new Doing Business report for 2014, in which the UAE is ranked fourth in the world for trading across borders, in terms of ease, efficiency and cost.