Maximum exposure for Egypt in Berlin 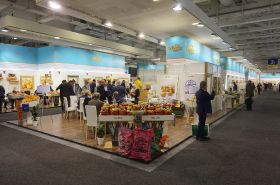 More than 90 Egyptian companies supported the Egyptian Agriculture Export Council by exhibiting under its banner at Fruit Logistica, which took place on 3-5 Febraury.

Their participation, in an area of more than 1,700m2 at the show, captured the attention of hundreds of international enterprises from all over the world.

Egypt, which was the official Partner Country of Fruit Logistica, held more than 700 business meetings during the trade show and is ready to expand its agricultural exports beyond its loyal partners.

“We have put our trust in this show since 1999 and this year we’ve broken all participation records,” said the chairman of the Egyptian Agriculture Export Council, Ali Eissa.

In 2014/15 the country exported over US$2bn worth of agricultural products, not including rice, which represents more than 14 per cent of Egypt’s GDP.