Apple suppliers have to know more

Interpoma 2012: Trade urged to invest in research or jeopardise traditional markets and fail to capitalise on new ones 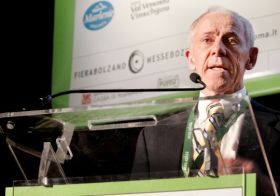 Apple marketers around the world need to learn more about consumers if they are to succeed in growing their sales while avoiding the potentially damaging effects of continued recession in traditional markets like Europe and over-enthusiastic expansion into emerging markets.

Those were the headline messages delivered by keynote speaker Desmond O'Rourke of Belrose Inc, renowned apple sector analyst based in the US, on the opening day of this year's biennial apple industry trade fair Interpoma in Bolzano, Italy.

The immediate challenge particularly for suppliers to the European market during the coming year or two would be to address a continued decline in per-capita apple consumption, O'Rourke observed.

To do this effectively, more money should be invested to obtain better information about consumer preferences as well as to improve communications via old and new media.

“The market has to reckon with the recession which has hit industrialised countries and with the consequent drop in the population due to a standstill in the birth rate and a reduction in immigration,” said O’Rourke.

"Economic power is moving from west to east, but according to analysts, with an eye to the future, the economies in BRIC countries do not offer the guarantees hoped for until recently," he noted, adding that many retailers had in fact "over-extended" in their drive to expand.