Brand-building via e-commerce, reaching out to new consumers in tier-two and -three cities, and managing future market growth projections in China were some of the hot topics discussed at Asiafruit Market Insight 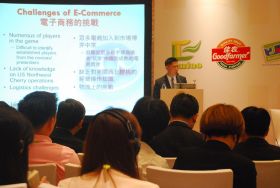 China is a market of markets, and the Yangzte River Delta region – the vast economic zone encompassing Shanghai and a cluster of around 60 cities in the hinterland with more than 100m consumers – serves as an exciting example of the dynamism and growth opportunities presented by just one of them.

This region formed the focus for the second edition of Asiafruit Market Insight, China’s new conference event, which was held at Hangzhou’s deluxe JW Marriot Hotel on 28-30 May.

More than 150 delegates from 20 different countries took part in the event, with more than two-thirds of them from companies and organisations based in China.

Sharing his deep insights into the growth of the market in the Yangtze River Delta in the keynote address, James Sinclair from consulting company InterChina said the region was spearheading China’s food and beverage import boom.

“In the five years to 2008, there was fairly modest growth in China's F&B imports of around 10 per cent a year. Since, then we've been seeing growth in the order of 33 per cent per annum to reach US$35.3bn in 2012,” said Sinclair. “‘Imported’ is growing very quickly.”

Fresh produce forms a key part of this expansion, according to Sinclair, who highlighted the importance of the fast-growing premium-end market. “China is a huge market for fresh fruit and vegetables but the premium part of it is very important, and actually receives very little attention compared with other categories,” Sinclair noted. “When you talk to fresh fruit importers, you find that many are benefiting from those very fast growth rates – many are talking growth of 30, 40, even 50 per cent a year.”

Food safety concerns – fuelled by the melamine infant formula crisis of 2008 and food adulteration cases since then – are one of the drivers of demand for imported fruit, but there are several others, he added.

“There’s an increasing demand for ‘premium’, and that is not just a result of increasing purchasing power. It’s about self-indulgence and pleasure, about getting the best tasting product. Luxury is also equated with status, and price is a good indicator. Consumers are very thirsty for knowledge, and in the absence of knowledge and understanding, they’ll use price as a measure.”

Such conditions are creating new opportunities for branded produce, and not just premium imported fruit brands such as Sunkist, Zespri and Dole. “We’re now seeing domestic brands move to grab a share of the higher prices,” said Sinclair, who pointed to the trend for local business tycoons to use their personal prestige to win consumer trust.

One of the most notable examples is Chu Shijian, the former tobacco king turned orange grower, whose story about the pursuit of success has captured the public’s imagination. “He’s now retailing his Chu oranges at around ten times the price of other oranges – 10,000 tonnes a year and demand still exceeds supply,” said Sinclair. “Why? Partly it’s because of his life story and refusal to be defeated after serving a stint in prison, but it’s also because the quality of his oranges is consistently high, because he’s trusted and respected, and because he’s put his personal brand on the product.”

Chu partnered with e-commerce company Benlai.com to tell the story of his product, and Sinclair underlined the role of online channels in building brands and selling fresh produce in China. “In terms of volumes, they’re not all that significant yet, but they’re growing fast off a low base, and they serve as an interesting platform for promotion.”

E-commerce on the rise

TMall is the largest player in China’s e-commerce market, which is soon to become the biggest in the world, and the general manager of the group’s LifeStyle Department Edith Huang was on hand to explain how the company is changing the way people shop in China.

“TMall now makes up 52 per cent of the entire B2C market in China, and nowadays people choose TMall not just for shopping but for fashion trends, like 5th Avenue in New York. We’re a congregating platform for brands,” said Huang.

Fresh food is an increasingly important driver of TMall’s offer, and the platform’s model of pre-ordering, where consumers pay a pre-sale deposit for produce, is proving to be a game-changer in the market, she said. “Based on these consumer orders, we can place orders with suppliers and the seller knows the precise demand, so we can control quality and reduce losses.”

Another key advantage of this channel is the capacity to deliver produce to consumers much faster than traditional retail channels, and collect their feedback on each product, said Huang.

While TMall’s high-profile promotion for US Northwest cherries in June/July 2013 was a landmark in this respect, Huang said the B2C platform had also achieved success with durian, kiwifruit and oranges. “Durian tends to ripen quickly during storage and transportation, which affects the consumer experience, but we’ve been able to pre-order and deliver it much more quickly to enhance consumers' enjoyment of the product.”

Loren Zhao of Fruitday, China’s leading online fruit retailer, explained how the e-commerce market has become fiercely competitive in China, with players rushing to establish a presence in every sector. Price competition is dominating, but he noted that logistics is becoming one of the key differentiators, with leading e-commerce players building in-house delivery capabilities.

It was a point echoed by Keith Hu of Northwest Cherry Growers, who confirmed that the marketing organisation was in talks with Fruitday and TMall on a follow up to last year’s campaign. “The biggest challenge is there are so many [e-commerce] players in the market right now,” said Hu. “We see parallels with the dotcom boom and bust in the US in 1999/2000. Some companies got the funds only to dissolve a year or two later, the ones that survived had to consolidate. But if we can identify the right promotions with good partners, there'll be great future opportunities for sure.”

Zhao said Fruitday was looking to outperform its rivals not through price undercutting, but through quality and supply chain optimisation. “We’re covering 80 cities in China, and most of them are tier-two and –three cities,” he said. “With the DCs we’ve already established, we can reach most of these city clusters, but we also rely on strong third party logistics service providers to get out within three days for home deliveries.”

Zhao shared research from Boston Consulting Group, which showed that consumers in tier-two cities such as Hangzhou generally had more disposable income and higher expenditures than those in the established tier-one cities.

“They’re also quicker at making purchasing decisions. Clearly we need to do more data mining and analysis so we can understand their specific needs, which vary greatly from region to region, and customise our approaches,” he said, signing off with some figures for thought.

The question of how to extend distribution networks to reach these consumers was the topic for the third session of Asiafruit Market Insight. The session was headlined by Kurt Huang of Shanghai Huizhan Fruit and Vegetable Wholesale market, who underlined how Shanghai has rapidly emerged as a hub for direct imports to meet the growing demand from the Yangtze River Delta, relying less on the traditional Hong Kong/Guangzhou distribution channel.

With the current distribution pipeline, exporters sell to importers or importer/wholesalers in Shanghai, Guangzhou, Beijing and Shenyang, who sell to secondary wholesalers in other markets. But Huang said that secondary wholesalers often had a bigger turnover than the primary wholesalers they buy from. “Many of these wholesalers in cities like Hangzhou are now interested to buy directly from exporters, but they don't understand how to do it yet,” said Huang. “They’ve been used to the wholesale system where you pay for product a month after receival whereas you to have to pay exporters one month before.”

Shanghai’s wholesale market hub shifted from Longwu to Huizhan last year, largely to accommodate the growth of trade, and Huang said it had also given new wholesalers an opportunity to set out their stall. “The new place is three times the size of the old facility and it’s created space for 50 wholesalers whereas there was only room for 20 before.”

Huizhan’s quarantine and customs inspection site, which has already received approval from AQSIQ, is also set to be completed within six to 12 months, which will speed up processing of imported fruit, he noted.

Such swift and efficient processing will be key in the future given the growth projections for trade, but Huang is unfazed. “Personally, I say no worries. Guangzhou market [Jiangnan] in the south handles five times our current volume and they don't have as much storage space because they cycle the commodities fast and the fruit goes direct to other parts of the country. Shanghai will be the same – we’ll clear customs and get to Beijing or other cities within a day or two so there won’t be so much stress on the system.”

The challenge of how to manage volume growth and maintain sales values was a pertinent topic for some of the major exporting countries represented on the panel of speakers.

Matt Crawford, corporate relations manager for Zespri China, explained how the New Zealand kiwifruit exporter, which began shipping to China in 2002, expects the market to account for 20 per cent of its total global sales by 2020.

“We're going to be doubling our volume to 20m trays over a four-year period in China,” he said. “Being a cooperative we need to maintain and grow returns to our growers.

“In China, we recently announced a new strategy focused on being a long-term player with stable relationships and a deep roots. We’re working with a family of importers, each strong players with a regional presence, to help us grow into tier-two and -three cities, keep demand tracking ahead of supply and keep prices up.”

For the Chilean cherry export business, the Chinese market has become a massive deal, explained Cristian Tagle, chairman of the Chilean Cherry Committee.

“Five years ago, almost half our total export volume was destined for North America, but two years ago China became a big focus and almost 75 per cent of our volume is coming here now,” said Tagle.

Chile is currently exporting around 3,700 container loads of cherries, but this number is expected to almost double in the next three or four years to reach 6,500 containers by 2016/17. “During Chinese New Year, we’ve been having to sell 100 containers a day but in three years’ time we’ll need to sell 200 containers a day.”

Tagle said the industry was well geared up for growth in terms of investments at the production end in frost protection technologies, new varieties, modern packing lines and infrastructure in order to maintain product quality. But he added that work was required to improve the logistics to market and local distribution, including the development of more ports of entry to China. He also highlighted the need to increase consumption and penetration of cherries in China via promotional efforts and quality controls. “Our estimates show that the current penetration of Chilean cherries among the Chinese population is less than 3 per cent, so there is plenty of room to grow.”

A detailed report on Asiafruit Market Insight will appear in the July/August issue of Asiafruit Magazine. To view photos from this year’s event, visit www.asiafruitmarketinsight.com