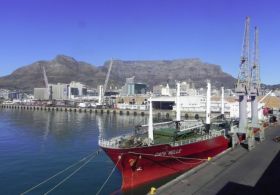 With less than a month left to the end of winter, the main storage dams in South Africa’s Cape regions are at historically low levels and it is clear that fruit growers face challenging times as their orchards start to blossom and vines start budding ahead of the new season.

Fruitnet visited the Cape’s main fruit and table grape regions this week, and spoke to growers across the area. The message is clear – there has simply not been enough rain this winter to fill the storage dams and agriculture will now have to compete with the vast population of the urban areas of Cape Town and surrounds for vital water supplies during the next summer.

The only positive is that so far it has been a reasonably cold winter which will assist in the blossom and budding period to create an even ‘wake-up’ when the trees and vines emerge from the winter. This will benefit fruit set.

However, nothing is as important as water to sustain the crop during the hot summer months. Official figures this week put the average of the regions dam levels at just short of 28 per cent compared to 53 per cent at the same time last year.

“With last year’s levels we just about scraped through this year and one can imagine what will happen if there is not significant rainfall during the next four to six weeks,” said a local government official.

Fruitnet visited the Hex River Valley and Paarl fruit regions, as well as travelling through the Villiersdorp region where the area’s main storage dam is located.

In the Hex, senior growers were lamenting that the storage dam in the Matroosberg region was around 30 per cent full. There, every farm is linked to supply from this irrigation system.

"We are concerned that there has not been enough rain and snow to feed this dam and therefore we are extremely worried about the season,” said Anton Viljoen.

In the Brandwacht region near Worcester former grower Joggie Mentz, who retired last year, commented that he had never seen the area so dry during more than 35 years, while in the Ceres region, Fanie van der Merwe of Bronaar Farms – a member of the TruCape Group – said if sufficient rain does not fall during the next eight weeks, he may have to remove the fruit buds from marginal orchards as there won’t be enough water to irrigate trees.

Van der Merwe said he was concerned about the future of season workers if the drought continues. “The seasonal jobs of 1,500 people in our area alone are at risk as there won’t be fruit on the trees to pick.”

Things are quite desperate in the Vyeboom-Villiersdorp region where the large Theewaterskloofdam, which supplies both the local agri industry and the sprawling suburbs of Cape Town, is now reported to be only 21 per cent full.

The area, which is normally covered by water after good rains in winter, now resembles a desert wasteland. At the local yacht club, one of the region’s most popular resorts, sailing boats have been lying on their sides for more than a year, as owners can simply not get them to the water.

Yet the fruit growing community remains hopeful and even say that some good may come from the present crisis.

Hein Keulder, chief executive of the Fruitways Group, leading producers of apples and pears in the Elgin and Vyeboom region, previously said he was not too concerned about prospects for the longer term because there are progressive plans in place to improve the Western Cape’s water availability, storage and supply.

“These plans need to be backed up by investment from the local and national government," he said. "The current water crisis will be the catalyst to transform the Western Cape and its large agricultural sector into more responsible and efficient water users for decades to come.”

Surely, though, even someone as optimistic as Keulder will, by now, have become anxious.

Inherently one has to be an optimist if you want to survive in fruit growing. In this regard a grower from Clanwilliam, who relies on the water from the Clanwilliam Dam, which is also just about empty, says that one must remember that in the past this dam filled up within one weekend, such is the wonder of sufficient rainfall in the catchment area.

Now, however, things are fast moving from desperate to critical and the industry can only hope that the heavens will at last open to bring relief. “The daily weather bulletin has become more important than rugby,” said one grower.