Rolling into the season

As the 2018 Australian table grape season gains momentum, Asiafruit looks at who's sending what, and where 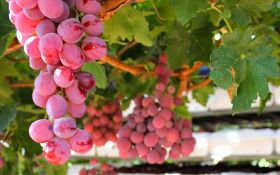 Export plans have rolled along nicely at the beginning of this year's Australian table grape season.

According to the majority of growers and exporters Asiafruit spoke to, China and Thailand continue to be the two main markets for fresh premium grapes from Australia.

Despite the mad rush of Chinese New Year trade, Australian grapes still maintain strong sales in the premium sector in China throughout the season.

“They don’t take any excuses when it comes to quality and we keep learning the same lesson over and over again – you don’t want it over mature. You don’t want it under the right sugar levels. We need to make sure we’re delivering exactly what they’re paying for, which is a superior price to our domestic market.”

Sources note Thailand as a popular market for the beginning of the season. Popularity of premium fruit gifting during this time period and an ability to airfreight fruit has made it an attractive focus.

For inexpensive lines, Australia Fruits says it has maintained successful markets in the Pacific Islands, with customers happy to receive a cheaper product.

In Japan, Valleyfresh has a strong position on Australian grapes, and this market's specific varietal restrictions work in the company's favour.

“The varieties that you can send [to Japan] are our three biggest varieties by volume,” said Smith. “They probably account for around 70 per cent of our production [at Valleyfresh].”

When Asiafruit asked Valleyfresh about emerging markets, or other opportunities around Asia, Smith was quick to mention there’s very little significant fluctuation for trade of fresh grapes within Asia Pacific.

In early January, many growers and exporters were eagerly awaiting import quotas to be released from Indonesia which came through toward the end of the month.

Read more about the table grape season in the February edition of Asiafruit Magazine.