Revenue climbed 24 per cent through the period, boosted by the acquisition of Hamburg Süd 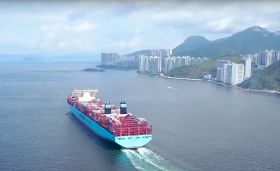 Logistics giant AP Møller-Mærsk has reported on a positive second quarter (Q2) of the year, with increases in both revenue and profit.

Revenue grew 24 per cent to US$9.5bn, mainly seen in key areas such as logistics and services, and boosted considerably by the acquisition and integration of Hamburg Süd.

Profit for the three-month period came in at US$26m, a huge swing from the US$264m loss the company turned in during the second quarter of 2017.

“With revenue up 24 per cent in Q2, we continued to deliver strong growth," said CEO Søren Skou. "The acquisition of Hamburg Süd of course was a positive contributor to growth in our Ocean segment, and we are pleased with the organic growth in non-Ocean. We expect revenue of around US$40bn in 2018, up almost 50 per cent since 2016.

“We also delivered a sharp improvement in unit cost in Ocean, after a Q1 that was negatively impacted by inflow of capacity from the acquisition of Hamburg-Süd and network issues," he added. "Profitability was significantly impacted by higher bunker prices in Q2 and remained at unsatisfactory levels. For the rest of the year we expect improvements in our profitability driven by lower unit cost and higher freight rates.”