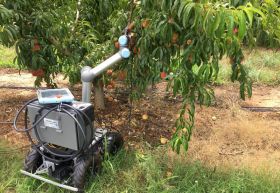 The US state of Georgia is trialling intelligent robots developed by the Georgia Tech Research Institute (GTRI) to manage its peach orchards.

With an estimated total production value of US$71m, peaches represent an important crop for the state’s economy.

WSB Radio reports the robots are designed to handle the human-based tasks of thinning and pruning peach trees, which could result in significant cost savings for producers in the region.

“Most folks are familiar with the harvesting of fruit and picking it up at the market,” said Ai-Ping Hu, a GTRI senior research engineer who is leading the robot design project. “But there’s actually a lot more that gets done before that point in the cultivation cycle.”

The robot specifically addresses two key components of the peach cultivation cycle; tree pruning and tree thinning, however it has been suggested the robots may have a future in harvesting the fruit.