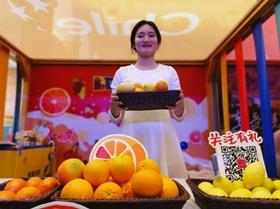 Chile put on an eye-catching display as part of its Chile Week China 2019 campaign to officially present its diverse range of citrus to the Chinese market.

Visitors to the Chile Food Market at the Shanghai Global Harbour Mall, which provided the backdrop for the launch of the promotion, had the opportunity to taste the fruit, along with other Chilean products including seafood, wine and pisco.

Chinese customs officials recently travelled to Chile to review its phytosanitary protocols, resulting in the signing of a pre-agreement between the two countries that is due be ratified by their respective presidents in November.

Asoex president Ronald Bown said citrus would join a growing line-up of produce exported to China, which in the medium term will become the main destination for Chilean fruit.

Cherries led the charge, making up 41 per cent of the total, followed by table grapes, plums, nectarines, kiwifruit, avocados and apples.