China opens doors to all US apple varieties 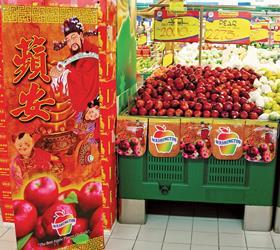 After 20 years of effort, the Washington apple industry has finally gained full access for all its varieties to the Chinese mainland. The timing couldn't be better for Washington's growers as the industry is in the midst of marketing its largest crop in history, currently estimated at 150m cartons.

The agreement was reached over this last weekend during bilateral negotiations in San Francisco between the USDA's Animal, Plant, Health Inspection Service (APHIS) and China's General Administration of Quality Supervision Inspection and Quarantine (AQSIQ) that will admit all apple varieties grown throughout the US meeting conditions specified under a new working plan.

The first shipments of Washington apples are expected to commence in about a month and a half. Until now, only Red Delicious and Golden Delicious varieties were legally allowed to be exported to China.

'The Washington apple industry has changed tremendously since we first gained access to China in 1994.” said Washington Apple Commission (WAC) president Todd Fryhover in a release.“Red and Golden Delicious now account for less than 40 per cent of our overall volume, and gaining access for the rest of our varieties allows us to provide Chinese consumers with more high-quality choices from Washington.”

Fryhover and Barbara Walkenhauer, chair of the WAC's board of directors, are reportedly en route to China to 'meet with Chinese fresh fruit traders and personally encourage them to bring... additional varieties.'

The Washington apple industry has seen a dramatic change in its prospects for sales to the Chinese mainland in recent months. Only last October, Washington regained access for Red and Golden Delicious after more than two years of being shut out due to phytosanitary issues. China had been a 3m-carton (18.1 kg) market for Washington state with a farm gate value estimated at US$55m as recently as the 2010/11 season.

'There is every reason to believe our industry could double that figure to as much as six million cartons given a full season of shipping,' says Danelle Huber, international marketing specialist for the WAC.

Washington has had its share of challenges this season. A labour impasse affecting ports along the US West Coast has severely restricted shipments to Asia and other international markets since last October. Russia's embargo of agricultural imports from western nations, a potential anti-dumping case threatening exports to Mexico and a US dollar greatly appreciated in value have taken their toll and Washington's international trade.

'We've excellent quality fruit this year,' said Huber, who just returned from a marketing trip to South East Asia. 'Everywhere I went, importers were saying how much they loved our apples but just wished they could have more. Needless to say, we're hoping that the laboir problems at the ports are resolved – and soon.'