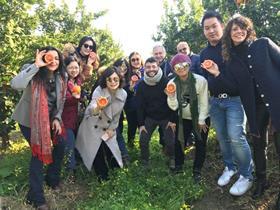 CSO Italy, in collaboration with the European Union, has announced the first year of its ‘European Art of Taste: Italian Fruit & Veg Masterpieces’ marketing campaign reached an estimated 600m people.

The project, funded for €3.7m (US$4m), focused on the promotion and distribution of Italian kiwifruit, blood oranges and processed fruit and vegetables in markets across China, Japan and Taiwan.

One of the reasons why the campaign has been so successful, according to CSO, is thanks to the engagement of key opinion leaders who engaged consumers via social media, including Weibo and Wechat.

Journalists and professionals were also invited to Italy for a series of press tours in September, November and January, during the harvest campaign of tomatoes, kiwifruits and blood oranges, providing them with a direct experience of the cultivation and production of Italian fruit and vegetables.

According to CSO, Covid-19 reduced the number of events during the peak harvest period for kiwifruit and blood oranges in December and January, however it said the encouraging results of the first year had established the base for productive collaborations in the future.