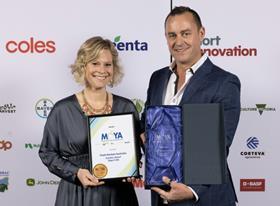 FMA – the national organisation that represents the market chambers of each of Australia’s central markets – was recognised for its ‘A better choice!’ - Shop&Win campaign.

“It's a great honour for the team and all those involved around the country supporting Australia’s local fruit & veg shops by the ‘A better choice!’ programme to win the PMA-Produce Plus Marketer of the Year Award for 2021,” said FMA’s national program manager, James Patrick.

“We are such a small player and team in such a big industry that's representing an important and sometimes forgotten sector, competing against multinational enterprises. This campaign was created from start to finish in-house with minimal agency support, so winning MOYA 2021 means so much more to us, as there was immense effort and time put into this campaign by all those involved. Congratulations to all the other finalists.”

With Patrick unable to attend the Gala Dinner, FMA'S deputy chair, Hamish Montague, accepted the award on behalf of his team.

FMA created the Shop&Win competition as part of its ‘A better choice!’ programme, which supports independent fruit and vegetable retailers across Australia with marketing initiatives that encourage consumers to shop at their stores.

Launched in March, Shop&Win was FMA’s version of a shopper rewards programme, where the offer of substantial weekly prizes provided an incentive for consumers to shop at local independent grocers.

MOYA judges were impressed by the way the campaign harnessed a wide range of marketing tools – from point-of-sale activations through to digital advertising – to drive awareness of the competition, along with participation

Between 1 March and 15 April (2021), the campaign's activations reached 2.7m people, with over 6m impressions across radio, social channels and YouTube. Over 265 stores were nominated as part of the competition during this time period, with 92,914 entries received from across Australia.

“Capturing such a large audience over a relatively short time was very impressive, and from all reports interest in the competition has continued to grow since MOYA nominations closed” said Matthew Jones, editor of Produce Plus Magazine.

“The ability to unlock added value for a cluster of independently operated grocery stores also demonstrated a high degree of marketing innovation in the eyes of the judges.”

The ‘A better choice!’ - Shop&Win campaign was chosen from a strong field of five finalists. The four other finalists were:

Produce Plus Magazine and PMA Australia-New Zealand congratulate FMA on its successful campaign and all five finalists for their outstanding entries.

The upcoming Spring edition of Produce Plus will include an interview with the FMA team. Subscribe to receive your copy of the magazine and access to the Produce Plus app.

The 2022 PMA-Produce Plus Marketer of the Year Award will be presented at next year’s Hort Connections. The award continues to celebrate outstanding achievement in the field of fresh produce and floral marketing across Australia and New Zealand. It is open to both individuals and team members from any part of the value chain.