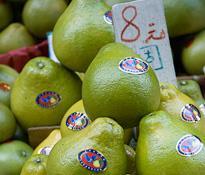 China’s pomelo season took off at the beginning of this month, around three weeks earlier than last year, with positive crop forecasts not mirrored by export expectations.

The total volume of the pomelo harvest is expected to be 30 per cent higher than 2008, according to industry sources, with good quality but smaller fruit sizing peaking around size 10.

On the downside for production is the rising cost of labour. “Labour costs have increased quite a lot; it’s around 15 per cent higher than last year,” Mike Su of grower-exporter Jining Sanlong told Fruitnet.

Domestic pomelo demand is still strong in both north and south China, said Mr Su, but based on early-season sales, he expects the European market will again be oversupplied with Chinese pomelos.

“Oversupply could be a problem this year,” Mr Su said. “It may be a bit less than last year, but it’s still going to be tough. I can see that with other traders already starting with early sales.

“There’s no more room for growth in Western Europe. Eastern Europe is taking quite a bit of volume, though, and I feel that will increase over the next few years.”

The exchange rate has been stable over the last four months, a positive sign for exporters.