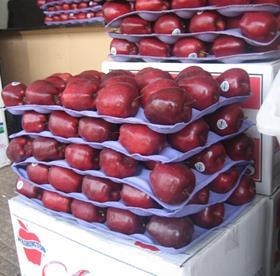 A 70 per cent tariff on US apples has virtually priced them out of the market, say importers

That decrease could largely be attributed to India’s ban on Chinese apples, which took effect in June 2017, because China, together with the US, has traditionally dominated India’s apple imports.

Import numbers for calendar 2019 will probably not be available until the second quarter of this year, but customs data analysed by Fresh Intelligence Consulting for the 12 months to June 2019 suggest volumes could rebound somewhat. Total imports increased 11 per cent to 276,842 tonnes for the 12-month period, from 248,708 tonnes in 2017/18.

While imports from the US almost halved year-on-year in the 12 months to June 2019 to 76,303 tonnes, and China remained “absent” – at least in official figures – a sizeable increase in sendings from European suppliers looked to have offset the shortfall. Italy and Poland both ramped up their shipments, with Italian exports rising more than ten-fold year-on-year to 47,446 tonnes, and Polish sendings reaching almost 20,000 tonnes, up from 3,126 tonnes in 2017/18.

Looking to the year ahead, however, key industry players are predicting a further decline in India’s apple imports, citing a range of challenges.

Sanjay Shah of Adani Agrifresh, an apple importer with sizeable investments in domestic production, says India’s fruit import market in general has become more volatile in the past two years since demonetisation and the implementation of the single-tax GST regime.

“The market has become very dicey with huge ups and downs,” says Shah. “Many traders have lost heavily and become defaulters.”

For apple imports, the outlook is rendered more uncertain by speculation over whether the ban on Chinese apples will be lifted, and by a supplementary 20 per cent duty imposed on US apples in June, which has ramped up the tariff to 70 per cent.

An oversupply of domestically-grown apples is also making for a tough trading outlook moving into the 2020 apple import campaign. Production from Kashmir, which accounts for the lion’s share of Indian apples, was hard to gauge this season, but importers say there has been a late-season surge in supply from the region with a lack of storage-quality fruit.

“Kashmir is in political turmoil, resulting in labour and transport shortages. A lot of fruit was picked late and is not fit for storage,” says Gagan Khosla of NGK Trading. “Domestic apples are in abundant supply, especially from Kashmir, and they’re struggling to sell even at retail prices of 80 cents per kilo. Most of the fruit is low grade.”

Competition from domestic apples is not simply one of oversupply, however. Himachal Pradesh, India’s other major producing state, enjoyed a bumper crop in 2019, with volumes doubling and prices falling by around 20 per cent, according to Adani’s Shah. More remarkable was the improvement in quality this year, he notes.

“Quality was the best in 20 years with hardly any hail damage or scab on the fruit,” says Shah. “Adani organised a significant amount of hail nets at subsidised prices for growers, especially in our sourcing catchment areas. The response was excellent, so this year we’re planning to provide 1,000m2 of hail nets to growers.”

“The Indian apple industry is seeing investments on new varieties, better planting material, cold storage facilities and anti-hail nets, with support from both state and central governments,” he observes. “The Indian industry is set to see an increase in overall volumes and a longer supply window.”

In the immediate term, Arora says the current glut of domestic apples will impact the 2020 import campaign. “The oversupply of domestic apples from Kashmir has brought prices down significantly in the market. The controlled atmosphere storage facilities are all full, and we’ll see longer than normal supply into the Indian market even from CA storages this year.

Khosla predicts it will take some time for the apple market to recover. “We need to wait and see what quality comes out of the domestic CA stores.”

China and US face barriers

A ban on Chinese apples remains in place, even though there are reports that smuggling of the fruit into India is a significant and growing problem. While speculation suggests the ban could soon be lifted, some importers are not convinced.

Meanwhile, the US, India’s other primary source of apple imports, is grappling with a 70 per cent duty imposed as part of an ongoing trade dispute between the two countries. Importers say the 70 per cent tariff makes trade virtually unviable.

“The duty has dramatically reduced the volume of Washington apples to India,' says Arora. 'With this tariff, it is almost impossible to compete with other countries who are at 50 per cent.'

Arora predicts a substantial decline in imports from Washington this year if the tariff remains in place. He says there is no news to indicate the supplementary tariff will be removed in the coming weeks.

The prospect of a relative absence of Chinese and US apples should result in a bonanza for alternative suppliers from Europe and beyond. Yet despite a sizeable increase in European imports, their market performance has been mixed so far, according to importers.

“European suppliers – Turkey, Poland and Italy in particular – have been trying to fill the space left by China and the US, but Turkey and Poland are struggling on quality and Italy on the high CIF price,” says Shah.

Turning to the current campaign, Arora says while Turkey has a sizeable crop, quality could be a problem in the first half of 2020 as climate change and hail have affected production, resulting in out-turn issues for longer transit destinations.

“Poland is short overall but is still trying to protect its market share in India. We see a lot of Polish apples in the market.

“Italy also has a decent crop, but is enjoying strong sales movement all over the world, so prices have increased a little. The opportunity could be on the smaller sizes, which are still very competitive and acceptable for the Indian market.”

Should China regain access to the market, he says it would have a severe impact on imports from all other countries. “China is by far the biggest player on apples with an edge over other Northern Hemisphere growing origins. It has massive scale, competitive prices and freight rates and quick turnaround time.”

Even if China does not regain entry, Arora expects a tough year for all suppliers of imported apples. “The demand for apples overall is down on previous years,” he says. “GDP has been falling and the unemployment rate is the highest it’s been for some time. This year looks threatening as all apple exporters are looking at India to be that engine of growth, but the internal conditions with the economy do not look positive.”