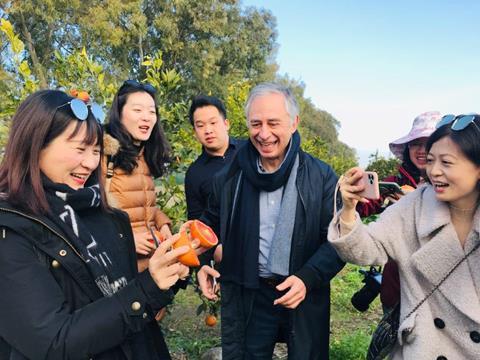 Agri-food sector journalists and food-bloggers from China met in Shanghai this month, during the middle of the blood orange season in Sicily, to learn more about the produce.

Much of the meeting focussed on the cheapest and quickest means of transport for the fruit travelling from Italy to China. Consumer interest in the fruit is reportedly growing in the Chinese market, and the Tarocco and Moro varieties produced in Italy, in the Plain of Catania at the foot of Mount Etna volcano, are said to boast distinctive characteristics and properties.

Compared to those available domestically, the Italian grown fruit is recognised as unique in China for two main reasons: the tender flesh and the bittersweet flavour, which is substantially different to Chinese grown fruit, which is more bitter.

After the Shanghai event, some journalists visited Sicily as guests of Oranfrizer, a company co-funding the CSO Italy project, to gain first-hand experience of the production methods and scale.

Oranfrizer reported the promotional campaign has experienced success in China, as well as Taiwan, Hong Kong and Japan, with further activations still to come.