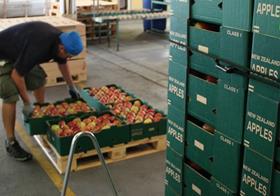 Export of apples and avocados from New Zealand to India have nearly doubled since 2016, but high tariffs of around 30-50 per cent on most commodities are a hindrance to export growth, according to The New Zealand Horticulture Export Authority (NZHEA)

The NZHEA says India could become a major export market if progress could be achieved in reducing tariffs.

“These high tariff rates highlight the value to horticulture of progressing the New Zealand-India Free Trade Agreement - in tandem with the RCEP agreement - and the potential for India to become a top export destination for horticulture if tariffs can be reduced,” the NZHEA said in a statement.

Talks at the Regional Comprehensive Economic Partnership deal, which included India and New Zealand, reportedly appeared halted. However, 2019 being an election year for India is a speculated factor.

Currently, New Zealand has the European Union and China to focus on, as the nation sends a majority of its exported volume to these locations (US$562m and US$401m respectively).

Eleven countries have free-trade agreements in place with New Zealand, and with the Comprehensive and Progressive Trans-Pacific Partnership coming into force on 30 December, tariffs will be reduced with a significant number of trading partners including the country’s third-largest buyer, Japan.