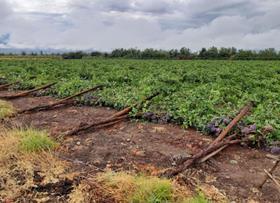 Chilean fruit growers are counting the cost of devastating storms that have caused significant damage to a range of crops, particularly table grapes.

Jorge Valenzuela, president of Fedefruta, said heavy rain on 29 January in the Valparaíso, Metropolitana and O'Higgins areas had caused an “agricultural catastrophe” on a level fruit growers had not seen before.

“At this moment, we see that the most affected fruit crop is table grapes, and we estimate that 50 per cent of the mid-season varieties, which were about to be harvested between Valparaíso and O'Higgins, have split,” Valenzuela said. 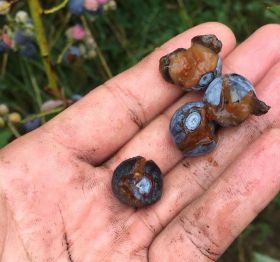 “This is without considering other damages such as the fall of fruit and vines that did not support the weight of the water.'

In addition to the damage caused to table grapes Valenzuela said there were reports of damage to stonefruit in Central Chile and well to blueberries grown in the province of ñuble.

In some cases trees and vines were torn down by the fierce weather resulting in 100 per cent losses, and hot temperatures the following day may cause more problems.

“In the Malloa area, in particular, 75mm of water fell in less than 24 hours, which together with the heat (29°C on 31 January), generates a favourable scenario for the proliferation of fungi and diseases,” Valenzuela said.

Government officials have met with Fedefruta and other industry bodies to assess the damage and discuss ways to support growers affected by the weather, including possibly adapting pandemic support measures.