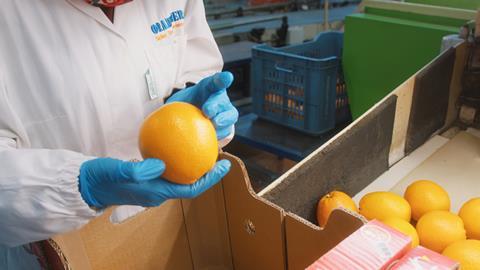 The first 10-tonne test shipment by air arrived in Tokyo at the end of April 2022 after a new protocol was developed that did not require Japanese phytosanitary inspectors to visit Italy.

Unifrutti has been present in Japan for 25 years and the company’s Italian and Japanese divisions worked together to achieve the first shipment, managing the entire value chain, from cultivation to processing and distribution.

“The promotion of excellence is a cornerstone of the Italian strategy of a group that has always researched and worked to enhance its value,” Gianluca Defendini, chief executive of Unifrutti Italian Division.

“The opening of this commercial route represents an example of how we operate, preserving the specificity of the productions and ensuring their domestic and international development, especially in the markets directly overseen by the group.”

Nello Alba, chief executive of the Sicilian citrus producer Oranfrizer – which has been part of the Unifrutti Italian Division since 2020 – said presented a great opportunity for Sicilian blood oranges.

“The group feels confident that this first important step will represent the beginning of a stable presence of the Sicilian blood orange in Japan and beyond, contributing to the production and diffusion of this exceptional product,”

In 2002, Oranfrizer hosted, as a technical partner, a group of Italian researchers from the University of Catania and Japanese researchers in charge of developing the dedicated phytosanitary export protocol.

Over the course of three years, a protocol was identified and approved by the Japanese authorities, which involved treating the orange cold for 14 days at a temperature below 1.2°C to eliminate the potential risk of spreading the Mediterranean fly.

Following the onset of Covid-19, Unifrutti’s Italian and Japanese teams, Nippon Express and the phytosanitary services of the respective countries ­– with the mediation of the Italian Embassy in Japan – collaborated to complete all control procedures remotely without the presence of the Japanese phytosanitary inspectors in Italy.

“We are proud of being part of such a project and of the work we have done in recent months together with Unifrutti and Oranfrizer in order to ensure the return of the blood orange in Japan despite the challenging period of international fresh produce trades” said Daniele Rubessi, food and beverage vertical manager of Nippon Express.

Yojiro Sugiki, Nippon Express Italia’s administration and business planning director for Japan, was just as proud to “have given Japanese consumers the opportunity to re-experience this unique fruit, well recognised in the market as an icon of Italian and Sicilian fruit and vegetable productions”.