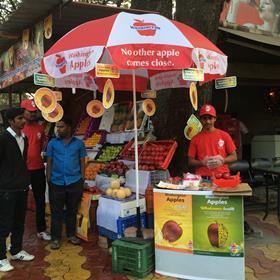 Washington apples have technically regained access to the Indian market, after the Washington State Department of Agriculture agreed to provide non-GMO certificates to accompany shipments.

India’s Food Safety and Standards Authority (FSSAI) enacted a law on 1 March 2021 requiring imports of apples and number of other fresh fruits to be certified as non-GMO. The US Department of Agriculture is not issuing non-GMO certificates, and this effectively brought a halt to Washington apple exports to India on 1 March.

However, the Washington State Department of Agriculture this week agreed to provide the required certificates, paving the way for trade to restart.

“It will take some time to get the supply chain primed, but we are hopeful that initial shipments will resume next week,” Mark Powers, president of the Northwest Horticultural Council, told Fruitnet.

Washington apple exports to India have contracted sharply this season. Exports were down by more than 64 per cent in the season to the end of February 2021, with just 381,614 cartons shipped compared with 1.07m cartons in 2019/20.

Whether shippers can make up any lost ground in the remaining months of the season remains to be seen. US apples continue to face a punitive 70 per cent tariff in India, which compares unfavourably with a 50 per cent duty on all other apple import origins. This season’s crop is shorter and FOB prices are higher, while a shortage of ocean cargo space is creating further headaches for exporters.

Todd Fryhover, president of the Washington Apple Commission, said the group was in discussions over how to support consumer and trade promotion activities in India when shipments recommence.

“We’re in the process of evaluating promotional opportunities for the balance of the Washington season,” said Fryhover, who confirmed that the industry still has the support of Agricultural Trade Promotion (ATP) funds.

“It will be interesting to see how the industry responds with the new certificate requirement and continued ocean container issues,” he added.