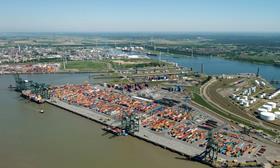 The port of Antwerp has revealed that the total number of reefer containers handled at the port increased by 2.7 per cent year-on-year in 2021.

The 1m TEU mark of operational reefer containers was passed for the second year in a row, with growth was mainly driven by a 6 per cent increase in export volumes.

“Our eating habits have a positive bearing on reefer rates,' said the port's Perishables Expertise Group in a statement. 'Meal boxes with fresh produce are becoming increasingly popular.

'Moreover, supermarkets are exploring ways they can deliver fresh groceries to the customers' homes,' the group continued. 'This phenomenon is already popular in the United Kingdom and is expected to blow over to Belgium.

'Many consumers are consciously choosing a plant-based diet and are looking for an expanded range of fruits, vegetables and meat substitutes. Preferably all year round.'

'he increase in conventional reefer volumes was of particular interest, the port said, with total conventional volumes increasing by 6 per cent on 2020.

Before the coronavirus crisis, there was a huge drop in the use of conventional reefer vessels, as the majority of perishables were transported in reefer containers.

As of 2020, it was again profitable to deploy reefer vessels in liner shipping due to the high rates in container liner shipping.

“The current fleet of conventional reefer ships was competed out of the market before the health crisis because of their high bunker costs,' the Perishables Expertise Group continued. 'However, this type of vessel fits perfectly within the current system of refrigerated storage and cross-docking.

'Since these vessels can be loaded and unloaded quickly and the infrastructure lends itself to it, a new and environmentally friendly generation of conventional reefer vessels could once again play a significant role in the future.'