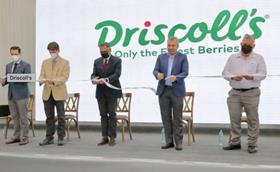 Driscoll’s has opened its fifth cold storage centre in Mexico in the municipality of Purépero in the state of Michoacán.

Said project, which has an investment of more than MXN500m (US$24m), is expected to contribute to the generation of more than 3,000 direct jobs in the region, as well as around 9,000 indirect jobs, particularly for local workers.

Speaking at the inaugural ceremony, Michoacán Governor Alfredo Ramírez Bedolla highlighted the willingness of businesses to invest in the state, noting it demonstrated “the confidence in Michoacán and in the quality of our berries, which continue to be recognised by global companies”.

According to Sandor Nagy, Driscoll’s vice president for the Americas, the new facility is Driscoll’s 15th in Mexico, boasts the latest technology in Latin America, is a sustainable project and would serve as a point of reference for the next 20 years.