Exports down at Port of Los Angeles 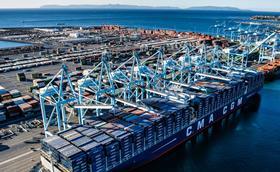 Exports from the Port of Los Angelesremain sluggish.

The US trade hub handled a total of 946,966 TEUs in April, up 37 per cent on April 2020. It was the biggest April volume in the port’s 114-year history, and the ninth consecutive month of year-over-year increases.

However, loaded exports over April declined 12 per cent year-on-year to 114,449 TEUs. Monthly export volumes have now declined (year-on-year) in 27 of the past 30 months.

Empty containers shipments reached 342,391 TEUs, a jump of 82 per cent compared to last year due to heavy demand in Asia.

“We have set records six of the last nine months, and the other three months were very close to new milestones,” said Port of Los Angeles executive director Gene Seroka.

“It’s truly been an unprecedented run here in Los Angeles. I’m grateful to our dedicated labour force and waterfront partners who work so hard to keep improving our services.”