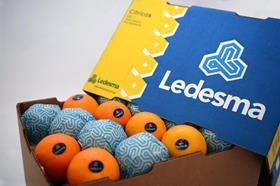 Argentina’s Ledesma exported 35,634 tonnes of citrus in 2021, 7,000 tonnes more than in the previous year, making it the country’s leading exporter in this category according to a report in Argentine daily El Economista. Oranges accounted for 86 per cent of shipments, with lemons making up the remainder.

The company said 2021 had been a challenging season due to extensive phytosanitary controls on shipments to the European Union and logistical disruption caused by Covid, which reduced the profitability of the campaign.

Europe was the leading destination for Ledesma’s orange shipments, while the US was the top market for lemons. The company also made its first lemon shipments to China in 2021.

Ledesma said it hoped to increase its participation in the global lemon market in the future. In order to do so, it is expanding its production in Jujuy and sourcing more lemons through partner growers in Tucumán.

To prepare for this, the company carried out a major overhaul of its packhouse in Libertador General San Martín, which is used to pack lemons for the US market.