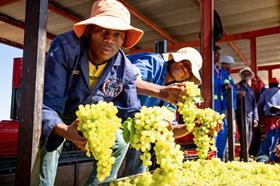 The South African raisin industry has announced a drop of 20 per cent in its 2022 forecast due to the effect of flooding along the Orange River and unusually high rainfall at the end of January and early February.

Although the flood waters along the river only affected 2.5 per cent of the expected crop, showers have had a significant impact.

“Accordingly, our initial crop forecast has now been adjusted downwards,' said Raisins South Africa. 'From our field assessments, the official crop size is now reduced to 65,000 tonnes of marketable product (72,000 tonnes farmers’ stock) for the 2021/22 season.'

Growers continued to work closely with technical staff to manage vineyards and harvest fruit for drying, and Raisins SA said it would continue to monitor the remainder of the season and communicate accordingly as 2021/22 progressed.

“The river level has since been declining to level (less than 2,000 cumec) and does not pose any risks at this stage,' the industry body said.

Over the past two weeks, Raisins SA has concluded on-farm assessments to measure actual damage suffered over the same period.

Stefan Jordaan, agri-specialist of Raisins SA, said that initial brix levels of grapes were low when the previous forecast was done, even on Sultanas, with the season then being ten days late. The first rains (in December) had a minimal impact on the crop.

The rain in the Orange River also slowed the fresh table grape harvest. However, in the case of table grapes, the region exceeded the upper limit of the first forecast despite the rain.

SATI therefore adjusted the forecast for the region to between 22.3m and 22.6m cartons. Reports on the table grape harvest in the region indicated that growers have now just about concluded their export packing.