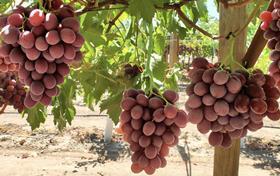 According to Sun World, the varieties offer 'new flavours for consumers and better growing characteristics for farmers'.

Sugrafiftytwo, an ultra-early ripening green seedless grape variety with a sweet Muscat flavour and firm crisp texture, and Sugrasixty, a mid-season ripening red variety with large berries and a tropical aroma with overtones of mango, are the result of a 13-year collaboration between Cornell AgriTech and Sun World.

Following the release of these varieties, Sun World’s said it would enable growers around the world to produce them and introduce them with consumer-friendly brand names to be' enjoyed by consumers worldwide'.

Sun World said that through the partnership, the royalties from the commercialisation of the varieties developed by both organisations would continue to flow back to and support the Cornell Grape Breeding and Genetics Program, which is led by Bruce Reisch, professor in the School of Integrative Plant Science in the College of Agriculture and Life Sciences.

“With the right varieties, the eastern table grape industry might consider expanding,” Reisch said. “That could drive economic development through tourism, farm markets and home enthusiasts. Many home growers are interested in doing something new.”

Sugarfiftytwo and Sugrasixty are the first grape varieties resulting from the partnership, which began in 2009.

The new flavours were developed through crossbreeding at Cornell that took advantage of its collection of germplasm, the genetic material in grapes that controls the expression of certain traits.

Although all breeding collections include germplasm, Cornell’s is special; since 1888, scientists at Cornell AgriTech have built expertise in breeding table and wine grapes suited to New York state’s climate and grower needs.

For the past 42 years, Reisch has focused on developing improved genetic and trait-marker technology to mine the genetic diversity of wild and native American grape species; and speed the release of new varieties with desirable traits like powdery mildew resistance, cold-hardiness and early ripening.

Increased exports from outside the US and the proliferation of proprietary varieties are creating challenges for retailers and consumers, said Jennifer Petersen, Sun World’s chief science officer.

Public institutions are an important source for innovation, especially as farmers and society face more complex challenges like climate change.

“AgriTech is focused on system solutions,” Petersen said. “It goes beyond the germplasm to find solutions for plant breeders, growers and consumers. It takes ten years just to develop a new variety.

'It’s amazingly complex to go fast and be as precise as possible to deliver what growers and consumers need,' she continued. 'We rely on the use of different technologies and cross-institutional collaborations to be successful. One of my top priorities is to pursue partnerships with private and academic institutions to ensure that Sun World continues to be an industry leader delivering premium varieties to growers and the marketplace.”

“Several more product releases are on the Cornell-Sun World horizon,” Marguleas said. “By combining our independent breeding efforts, we can develop even better tasting and more successful fruit varieties for growers and consumers around the world to enjoy.'