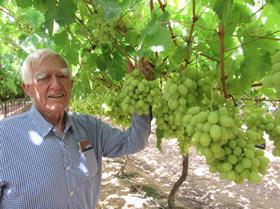 Aat Hoekstra, a Dutch settler who arrived in South Africa in the 1950s with ten pounds in his pocket, and who became a legend in table grape growing, coldstorage, marketing and the breeding of table grape varieties, has died at his home on the farm Nancy in the Paarl Valley.

Hoekstra received many coveted awards for his involvement with the table grape industry and in 2019 was honoured by SATI, the industry body, as one of eight outstanding contributors to the industry over a period of 125 years of experts.

The Hoekstra Family Trust, in a message to the Hoekstra Group of Entities, said it was saddened to say farewell to its founder.

The Trustees also confirmed that the group’s activities would continue as they previously had under the guidance of Hoekstra and as he envisaged.

The trustees also announced that Maleen Hoekstra, daughter of Aat, had also been appointed as chairperson of the boards of those companies.

Maleen Hoekstra told Fruitnet that Aat had signed all the relevant documents and was expected to undergo an operation this week.

“He peacefully passed away in his sleep,” she confirmed. “We will continue with the work my father started and it will be business as usual. We are in the middle of our harvest and we are determined to see it through with great success.'

Until very recently Hoekstra still managed the entire Hoekstra business despite his advanced age. “I am absolutely amazed with the way he continued to manage the group’s business, specifically during the last few years,' Maleen noted.

A visit tothe Nancy farm was always a revelation as it took you right into the center of the world of table grape entrepreneurship.

On one visit we enquired at the office where one would find Aat Hoekstra. “When he is in here, he normally sits at that desk over there, but his office is really out there.”

“Out there” meant the vineyards stretching from the homestead towards the mountain. From there it stretched to all the farms across the valley and into Noorder-Paarl.

Aat Hoekstra’s popular saying was that the footsteps of a table grape grower in his vineyard were like fertiliser for his vines. He certainly did not tolerate managers on his farm sitting in the office. They had to be, like him, in the vineyards.

Hoekstra created a smart and slick table grape business that stretches around the Paarl Mountain, and where inspired and dedicated staff walk in the footsteps of their leader.

Hoekstra grapes are packed on the farms and cooled at the group’s own coldstorage and distribution complex, beofre moving on to the company's own marketing division.

Among other things, Hoekstra also established a very successful table grape breeding business – including a special relationship with the late Ted Evans. He also established partnerships with some of the world’s leading breeders.

Hoekstra did not follow popular trends in the world of table grapes. While the whole South African industry has now more or less converted entirely to seedless grapes, he was perhaps the exception.

He admitted to Fruitnet that 70 per cent of the varieties on his farms were still seeded and that those are by far his most profitable varieties.

It probably has something to do with the popularity of Hoekstra’s named and the respect the trade in Europe has for him and the Hoekstra brand.

The Hoekstra brand was established in Europe during the 1990s through its melon export business.

The death of Aat Hoekstra, just about a year to the day that his great friend, JD Kirsten, also one of the leading table grape growers South Africa has produced died, marks the end of an era.

He told us early last year that he had no doubts that the industry was strong, and that the next generation would do the country proud.

“It was for me such a touching moment on Saturday when my dad told me he was proud of me and that he was sure his companies will be in good hands,” Marlene Hoekstra added.