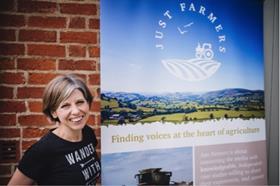 A media training project run by a former Countryfile director has received £20,000 to help farmers with communication and media skills.

BBC journalist Anna Jones started Just Farmers last year to bridge the disconnect between farmers and the mainstream media, helping to build confidence and improve communication skills at the grassroots of the industry.

Jones received the £20,000 grant from the Prince’s Countryside Fund, an organisation established by Prince Charles in 2010, and aims to enhance the prospects of family farm businesses and the quality of rural life.

The award will cover the training of 48 farmers over the next two years.

Jones said: “After last week’s brilliant Farming Focus from the BBC we’ve got to keep the momentum going. This grant will help individual farmers, from all sectors and systems, feel as comfortable talking to the media and urban audiences as they do in their own communities. I want to inspire farmers to feel proud of their story, so they can tell it again and again.”

Jones originally had the idea for Just Farmers from while researching for a Nuffield Scholarship in 2017, seeing a similar scheme founded in France.

She says her workshops encourage farmers to think more like journalists than marketing or PR professionals, saying it’s more about storytelling than self-promotion.

“We don’t tell them what to say, or how to say it,” explained Jones. “We just give farmers the skills and confidence to be in control of their own story. We don’t manage the media, we work with it. We don’t dodge questions, we put ourselves in the shoes of the person asking them.

“We go out of our way to meet people who think differently about food and farming. We packed out a vegan restaurant in Bristol!”

So far Jones has trained 24 farmers and is currently recruiting the next group, urging livestock producers, arable farmers, fruit and vegetable growers and smallholders from around the UK to apply. The scheme is open to every type of farm.

After a series of practical media education workshops, the farmers make a commitment to openness and transparency, being available for interview and allowing the media on to their farms.

Just Farmers also helps busy journalists and programme makers find independent farmer case studies who will pick up the phone, answer their questions and have an open-door policy to the media.

Jones said: “All members of the media have to do is register on the Just Farmers website and access our free online directory of farmers. We already have dozens of national and regional news journalists and programme producers using the site. Our farmers have appeared on BBC One, BBC Radio 4, LBC, on local radio and in local and national newspapers. One even featured in a Climate Coalition report.”