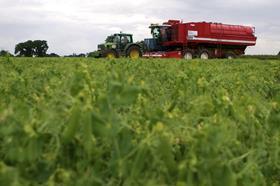 British pea growers are busy harvesting 24 hours a day as the eight-week season peaks ahead of Great British Pea Week.

Around 700 farmers along Britain’s eastern seaboard are working non-stop to produce the largest pea crop in Europe, mostly for frozen packs.

Britain’s east coast boasts a maritime climate which combined with the soil and planting conditions, is the perfect environment for growing top quality peas.

The harvesting process, which lasts on average eight weeks, is a huge operation which takes place between June through to August, 24 hours a day, seven days a week. Harvesting machines, known as pea viners, work in unison to harvest, shell and transport the peas from field to frozen as quickly as possible with the majority in just 150 minutes, ensuring the freshness and nutrients of each pea is locked in.

To mark the occasion each year, the Yes Peas! campaign runs Great British Pea Week, to recognise the industry-wide effort made by experts across the pea vining sector, which produces two billion portions of peas for the UK market and beyond each year.

Pea grower Russell Corfield, said: “At this time of year the pea harvester goes for 24 hours a day. There are approximately 700 British pea farmers working around-the-clock looking after 35,000 hectares of pea crops – the equivalent to about 70,000 football pitches. It’s like running a military operation - one day you can be on top of your game and then the weather turns and you’re fighting the battle!

“Now more than ever there has never been a more pressing time to ensure we have a successful harvest and we will be continuing to work hard to fill our supermarket freezers with Great British peas.”

In what is seen as a nationwide effort, seed producers, growers, harvesting machinery companies and freezers up and down the country are working tirelessly to ensure the UK continues to remain the largest producer and consumer of frozen peas in Europe, with Brits eating an average 9,000 peas per person every year.

Coral Russell, crop associations manager at the British Growers Association, which runs the Yes Peas! campaign, explained: “British farmers are proudly recognised for their expertise when it comes to producing high quality peas, with the peas on our plate being the culmination of over four months’ hard work.

“Britain is 90 per cent self-sufficient in pea production, meaning nearly all peas in supermarket freezers going into your trolley or online order are most likely grown by British farmers on a British farm, resulting in the superior quality and flavour which we know and love.”