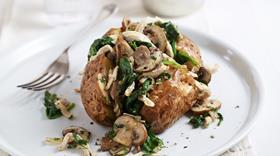 A new marketing campaign to promote the benefits of the baked potato will use in-depth consumer analysis to pick the right spud selling point for each segment of the market.

The campaign will be launched by AHDB in February with a budget of £150,000. It follows a £100,000 burst in the summer that promoted potatoes during the lockdown, and was seen five million times by British shoppers.

The health conscious will be told about the nutritional benefits of the potato, while those who need to feed a growing family on a budget will be reminded of the convenience baked potatoes can provide at a pocket-friendly price.

Nicola Dodd, senior marketing manager at AHDB, said: “The potato is blessed by a fantastic range of selling points, and is enjoyed in 94 per cent of British households. People in these homes range from marathon runners to those juggling the school run – which shows there really is a baked spud for everyone.

“We’ve invested in new detailed analysis that shows not only what benefits will suit different groups of people, but also how these people behave online – so we can bring them the right baked potato-based inspiration, at the right time, in the right place.”

The campaign will be executed across social media channels, where AHDB Potatoes already have over 250,000 followers across specific consumer-focused accounts on Facebook, YouTube, Instagram and Twitter.Additional budget will be allocated to reaching new people on digital channels.

The campaign will feature a new suite of designs that will be available to share with AHDB’s levy payers in the new year. This means that AHDB’s summer campaign was likely the last to feature ‘Bud the Spud’, the cheeky sunglass-wearing potato that originally featured in 2015 as part of a £4m four-year campaign joint with Bord Bia in Ireland.

“We are excited about putting what we have learned from our consumer analysis, as well as our experiences of handling press enquiries on behalf of the industry, to good work,' Dodd added. “Our targeting plan will deliver a campaign that promotes all of our key messages and ensures the correct messages land with the relevant groups of people.”