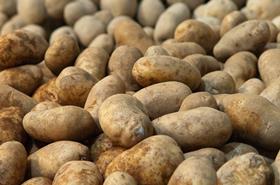 Researchers at the Earlham Institute (EI) have created a new automated workflow using liquid-handling robots to identify the genetic basis to prevent plant pathogens, a system can be used on a much larger and rapid scale than current methods.

The new EI Biofoundry automated workflow gives scientists an enhanced visual check of genetic mutations linked to the control of crop disease, speeding up analysis to a fraction of the time compared to current methods - from months to weeks - and accelerating development of novel products for crop protection in the farming industry.

The Earlham Biofoundry, alongside the Truman Group at the John Innes Centre, used this workflow to experiment on the control of the common potato pathogen, Streptomyces scabies, which causes a devastating disease known as ‘potato scab’, by Pseudomonas sp. (bacteria).

The team screened 2,880 Pseudomonas sp. (isolated from potato field) mutants with the plant pathogen in just 11 hours, to identify and correlate the pathogen growth inhibition with a biosynthetic gene cluster within two weeks, indicating which genes were preventing the pathogen.

This approach will pinpoint genes involved in pathogen growth inhibition by bacteria, not the plant themselves; where either a bacterial strain or a molecule produced by a bacterial strain would end up as the crop-protection product.

The new EI automated workflow will allow scientists to scale up the process of identifying Pseudomonas gene clusters that are responsible for restricting pathogen growth, avoiding human error, and increasing reproducibility and accuracy, the researchers explained. The engineering biology workflow can also be applied to similar bacterial genome analyses.

Co-corresponding author of the study and Earlham BIO Foundry manager Dr Jose A. Carrasco Lopez said: “We demonstrate the applicability of biofoundries to molecular microbiology by using automated workflows to identify the genetic basis of growth inhibition of the plant pathogen Streptomyces scabies by a Pseudomonas strain isolated from a potato field.

“The EI Biofoundry-generated workflow resulted in the identification of a gene cluster linked to the inhibitory effect on the potato pathogen which made the process much easier. By identifying the new genetic determinants, it opens the door to finding the metabolites involved in pathogen inhibition.”

“Manual screenings are usually performed with pin replicators in the same plate, where many mutants are together in the presence of the pathogen,” Carrasco Lopez added. “This means that a mutant in a non-related gene could mask the lack of inhibitory effect of a real-hit mutant by proximity.

“We solved this by creating individual assays for each mutant - this impacts the scientific community significantly, and provides enhanced control of crop pathogens based on biological processes which will translate into better crop yields.”

Although these microbiological methods have been used before, with screening of well-known mutant libraries, the new study has for the first time used an automated screening process to reduce the required time and complete the process in weeks, whereas manually it could take months.

Collaborator and first author Alaster Moffat, PhD student in the Truman Lab, who approached EI about the possibility of automating the biosynthetic screening, said: “We had previously been unable to identify genes important for inhibiting the growth of the pathogen using bioinformatics approaches, but this workflow allowed us to rapidly probe the effects of almost every accessory gene in the Pseudomonas isolate's genome directly, and find a novel biosynthetic gene cluster within a very short timeframe.”

The EI Biofoundry plans to progress the study by creating workflow modifications to adapt to new projects and pathogens. “Once we have identified the gene cluster involved in the synthesis of this new metabolite,” said Carrasco Lopez, “scientists could mutate every single gene to identify functions and essential genes for metabolite synthesis. This can be applied to control plant pathogens and further improve the potato crop’s yield, to test the species’ inhibitory range of these metabolites and to identify new genes from other bacterial species linked to the impairment of other crop pathogens.”