Avozillas even bigger this year 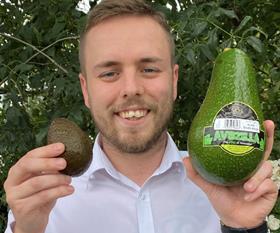 Jordan Blandford with one of this year's Avozillas

Tesco’s giant Avozilla avocados are even bigger than before this season, weighing in at a whopping 1.5kg on average, the retailer announced.

Thanks to strong growing conditions in its native South Africa, the variety, which is exclusive to Tesco, is up to 50 per cent larger this year.

The retailer’s chilled salad and avocado buyer, Jordan Blandford, said:“The fruit is extremely rare and comes from just a relatively small number of trees grown by one of the world’s biggest suppliers of avocados, in South Africa.

“The Avozillas tend to grow in number every other year because the plant is depleted after bearing such large fruit. Last year, we hardly had any but this year we also had very good growing conditions and these two factors combined to help produce the far larger fruit.”

Tesco believes this year’s crop will appeal to shoppers looking for value for money, as well as those with large families.

“The Avozilla is perfect if you are making a party size portion of guacamole as you only need to remove the skin of one fruit,” Blandford added. “One of these monsters makes a huge bowl of guacamole.”

When the fruit first went on sale in the UK in 2013 it made headlines as it was five times bigger than a regular avocado. Tesco said this year’s crop will be up to 10 times bigger.