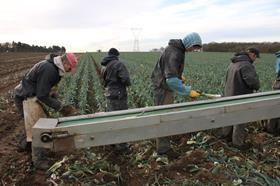 NFU president Minette Batters has called on the government to change course on a wage rate policy that she warned could threaten the livelihoods of British growers.

In her speech to the union's annual conference, Batters spoke of a 'looming crisis in our horticultural sector' as new Home Office rules on imported seasonal labour could mean a 38 per cent increase in the compulsory wage rate that growers will have to fund.

'This means that there is a real risk of further food inflation and of British growers going out of business,' she said. 'I am asking the Home Office to urgently rethink this policy which, if implemented, will be a huge mistake. It doesn't have to be like this - it doesn't have to be a fight.'

Batters described herself as 'increasingly impatient' at repeatedly having to explain the same problems to government and propose workable solutions, only for them to be ignored when the next crisis hits.

Her comments came as she called for new policies and investment into what she called 'the new world of optimisation of agriculture'. This, she explained, means the best policies and data that will enable sustainable food production, with food and environment seen as partners rather than competitors.

'Our destiny as farmers depends on the political realisation of that simple fact,' she added. 'Effective policies are created by people who have really listened and understood how rules dreamt up in a Whitehall office will work in a field.'