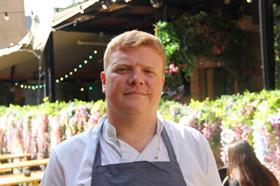 For all its creativity and buzz, the London food scene can be both annoying and faddy at times. Amid the constant hype about sharing plates, supper clubs, fermented foods, meat reduction and carb substitutes, some of London’s trendiest eateries can sometimes leave you craving a good old-fashioned steak and chips – out of a strange sense of rebellion if nothing else – but that’s not to say some of the latest food trends haven’t given rise to some delicious food and fantastic eating experiences. The social media hot air that surrounds them just gets a bit much sometimes.

One pop-up that seems to be striking a good balance between embracing a few of these trends and also getting the basics very right is Donnelly’s, which opened south of the river at Bermondsey Bar & Kitchen in January. Serving seasonal British produce from small producers that are listed on the back of the menu, the restaurant has a couple of delicious and colourful vegetarian dishes, as well as old favourites like a 40-day aged sirloin steak and a Galloway beefburger with all the trimmings. All the dishes come as sharing plates – or main courses, for more territorial diners – with an emphasis on long, relaxed, family-style eating.

This is only a snapshot of what’s on offer, however, as the menu changes week by week, and that’s determined by the suppliers and what’s in season – always a good sign. In fruit and veg, chef-patron James Donnelly uses New Covent Garden catering supplier Nature’s Choice and Kent farm The Wonky Parsnip, which specialises in growing weird and wonderful varieties – over 150 of them, according to its website.

“If you’re getting it from someone fairly small, you know you’re getting great quality every time,” says the 36-year-old from Cambridge. “There can be different amounts, and sometimes things need another few days to grow, but you know how much love’s gone into it when there are just one or two people growing it.”

Friendly, straight-talking and surprisingly laid back for someone that works a 70-hour week, Donnelly is part of a burgeoning group of passionate young British chefs championing sustainable, seasonal produce – think Tommy Banks, Mark Birchall and the fiery Tom Aikens, who Donnelly worked under at his Chelsea restaurant Tom’s Kitchen. During his time there, and at The Palmerston in East Dulwich, Donnelly says he learned not to overcomplicate his dishes and to let the quality of the produce speak for itself.

“With the veggie dishes, as long as you’ve got something that can hold its own, like a nice salt-baked beetroot, it almost doesn’t need too much to go with it,” says Donnelly. “If you know you’re getting the right produce, it does its own talking.” While this rings true on much of the menu, it cannot be said of the pickled beetroot salad. “The boys hate making it because there are about 15 different vegetables in it, but it’s a delicious, beautiful-looking dish,” he says with a smile.

Two of the many elements to this dish are the candy and rainbow beetroot – the kind of niche products that Nature’s Choice prides itself on. He says he has been working with the company’s commercial director Vernon Mascarenhas for about 15 years now, back when Mascarenhas ran Secrett’s Direct and he was cheffing at The Palmerston. Since then, both have been making it their mission to champion the flavour, freshness and environmental benefits of seasonal British produce from small farmers.

“The idea is to get everything – all the meat, fish, veg and fruit – as local as possible,” Donnelly says – the honey even comes from beekeepers on the same street as the restaurant – but he admits this can be challenging at certain times of year.

“At the moment, it’s great, there’s lots of stuff, but during the Hunger Gap [after the winter crops have ended but before the new season gets under way] there’s nothing here in the UK so I have to get a few little bits from further afield.” To tide himself over during this period Donnelly and his team also do a lot of pickling and fermenting, with various varieties of cabbage, beetroot and radish.

This kind of adaptability isn’t only necessary in the difficult spring months though, since the veg boxes Donnelly receives aren’t always filled with things he’s specifically requested, but rather the best seasonal produce his small suppliers have to offer. “We get two veg boxes delivered to us each week – one from Nature’s Choice on a Monday and another from The Wonky Parsnip on a Friday, which is full of the kind of stuff that supermarkets don’t want and can’t sell because it’s not uniform enough,” says Donnelly.

“When I get in on a Monday morning, I have to build the week’s menu based on what we’ve got” – a feat that must require a fair amount of creativity and knowhow when he’s dealing with unusual vegetables like patty pan squash, parsley root and salsify.

In addition, Donnelly gets a couple of £15 boxes of rescued vegetables through Nature’s Choice. “We’re trying to help the farmers out and do something to reduce food waste,” he says. “It’s veg that they can’t get rid of, but you cut the edges of it and it’s fine.”

The other reason for this approach is cost, of course, and Donnelly says he’s had to start thinking a bit harder about the produce he’s used since the 2016 referendum. “Top-end fruit and veg is very expensive these days,” he says. “Brexit pushed up food prices by about 12.5 per cent but Donnelly’s is all about root to leaf, nose to tail, using whatever we possibly can out of things.”

From a business point of view, it’s also been about finding the right part of London to be based in, and so far Donnelly’s has also had residencies at Louie Louie in Elephant and Castle and the Sun and 13 Cantons in Soho. While Elephant and Castle “just isn’t quite there yet for the nice food thing”, Soho is “saturated with some nice restaurants and some shit”, he says, “and we got a completely different crowd every day – it wasn’t really for me.” Over in Bermondsey Donnelly is quite content, however, his face lighting up when he talks about the regular customers who come back two or three times a week.

After a successful few months, springboarded by praise from respected food critic Marina O’Loughlin, Bermondsey Bar & Kitchen has asked him and his team to stay put until the end of the year. And Donnelly seems keen to stay longer, explaining that, for the time being, running a pop-up makes more sense for him financially than opening a permanent restaurant. “The main advantage to running a pop-up is that my finances aren’t on the line,” he says. “I pay a percentage of whatever I make on food and that’s my rent essentially, so if we have a bad week, the rent comes down.”

The main disadvantage is that he doesn’t get the revenue from bar sales, and this – combined with the fact that he’s buying top-quality produce and obviously has staff and chefs to pay – cuts his margins quite fine. On balance though, the pros outweigh the cons, he says.

Ultimately, Donnelly has ambitions to open a permanent bistro-style restaurant of his own in Peckham, where he lives, and perhaps further down the line, a deli-cum-restaurant in one of the home counties.

“Whatever fruit and veg I’ll have on sale will be what’s on the chalkboard for dinner that day,” he says. And after a meal at his pop-up, you realise it’s this uncomplicated, seasonal approach to produce that he wants to make his trademark.