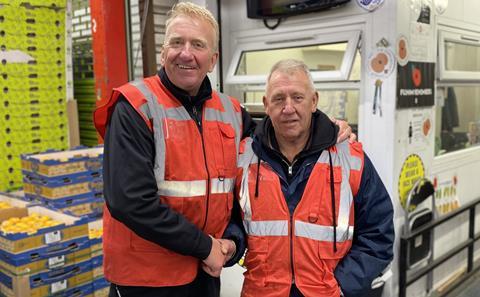 It’s a historic day today, as Bill Sanderson retires after 53 years working in the Market, as the last man standing of more than 2,000 porters who moved across from the old to new market in 1974.

Bill began as a 17 year-old in WC2, working for Pavitt, Steward and Calder which has now become Allison Risebro. He became a porter when he turned 18 and has stayed in the role ever since, with the last 20 years spent at Bevington Salads.

“I’ve worked at a few firms,” said Bill. “And I’ve seen a lot of changes. There’s no union now, a much more diverse workforce and a few less characters, though there are still some.

“I hadn’t been working for a few months when the job at Bevingtons came up and I knew Gary (Marshall) well. He’s obviously one of the characters and he’s been a good guvnor to work for,” he said.

“I still enjoy it, but I’m looking forward to taking it a bit more easy, playing some more golf and getting some routine back into my life. As the market has got earlier, I’ve ended up starting at 9pm, so it’s going to take some getting used to. I’m sure I’ll come back and say hello and I’m still interested to see how the newly developed market turns out.”

Bill is an Arsenal fan, with six grandchildren and three great grandchildren, so he’s not going to short of things to do!

Gary said: “Using a football analogy, Bill is like one of those great players who always look they have more time to do things than everyone else. He’s never rushed and he always gets it done. In his years with us there has been industrial action called by the T&GWU and Unite, but we have never had an argument; there’s always been total respect both ways.

“Bill is loyal, honest and reliable and will leave an unfillable void in my business. He’ll be much missed.”