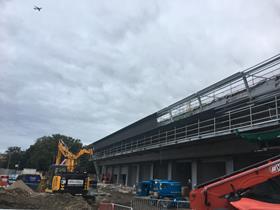 The lengthy standoff between traders and market authorities at New Covent Garden Market has seen a significant breakthrough with an agreement between the parties “in principle” on changes to the controversial market design.

The Covent Garden Market Authority (CGMA) launched a public consolation for market users and stakeholders on the proposed changes last week, signalling a way forward from what has been an occasionally bitter standoff.

The dispute between traders and the CGMA centred on designs for the new market, with construction already 25 per cent complete.

Traders insisted the new market would put the operational effectiveness of the market at “serious risk”, with a lack of traffic and trading space.

In August last year, the Covent Garden Tenants Association started legal action against the market authorities over a breach of contract, relating to the suitability of the new market design.

Writing in the consultation, chairman of the CGMA David Frankish said the parties had been talking for several months in search of a solution outside of court however.

“Many of you reading this will be aware that there has been an ongoing legal dispute between the Covent Garden Market Authority (CGMA) and some of the tenants supported by the Covent Garden Tenants Association in relation to the ongoing redevelopment of the Market.

“Together we have come up with a set of proposals to modify the design of those parts of the redeveloped Market that have not yet been built so as to take on board the tenants’ stated concerns.

“I believe the proposals being consulted on today, provided they are affordable within the funding we have, are the right and necessary changes for us to make. They provide both the CGMA and the CGTA and their members with a market fit for the future that we will all be proud of.”

The proposed changes to the market are:

1. The enlargement of the vehicle loading areas for Building C and the unbuilt part of Building A, this is achieved by moving back the front of those buildings at ground floor level by 9 metres and removing some of the proposed supporting columns.

2. Widening the proposed Buyers’ Walk in the yet unbuilt part of Building B. The proposal is that it be between 6 metres and 8 metres wide instead of 4.5 metres.

3. Extending the canopies in the unbuilt part of Building B to provide addition weather protection. After the consultation period has ended, a report on the responses will be compiled and the CGMA Board will consider it and make a formal decision as to whether to proceed with all, some or none of the proposals. The report on the consultation will be published on the CGMA website, as will the Board’s conclusions.

Images of the proposed changes can be seen on the CGMA website.

Those wishing to share their views on the proposed changes can do so here.