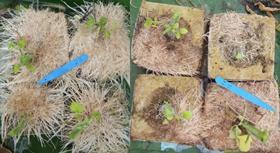 Symptoms of the disease can be severe
Credit: AHDB

A Carbon Gold biological treatment has come out on top in an AHDB trial on how to suppress tomato blight root mat disease.

First observed in 1999, the disease affects 88 per cent of British tomato growers, according to a 2016 AHDB survey, costing growers an average of £29,000 per hectare per year.

Most of the growers surveyed estimated that between one and five per cent of their crop was infected by the disease in 2015 growing season.

The majority of tomato varieties and rootstocks currently grown in the UK are affected by the disease, which causes a hormone imbalance in the tomato plant, resulting in excessive root growth. This can lead to drainage channels becoming blocked in the growing cube.

Tests were carried out on the symptoms of root mat in rockwool – a substrate used for the commercial production of hydroponic tomatoes. Results showed that while no treatment used alone is capable of preventing infection entirely, some were found to suppress the spread of root mat.

The Proradix treatment resulted in the lowest incidence of visible infection on the cube surface covered by the end of the trial, but the plants with the healthiest root systems were those in plots treated with Carbon Gold. The combination of Trianum P and Serenade ASO also appeared to have reduced infection, according to the AHDB researchers.

Carbon Gold CEO Simon Manley said: “We welcome this groundbreaking research into root mat disease, an infection which affects nearly 90 per cent of tomato nurseries in the UK and threatens significant crop losses.

Root mat in tomato is caused by rhizogenic plasmids (pRi), most commonly vectored by Rhizobium radiobacter, a common soilborne bacterium.

There are currently no known treatments to prevent symptoms of the disease and, consequently, the focus is on controlling root mat to prevent infection. According to the AHDB report, there is “good reason to believe biological treatments could reduce tomato root mat by influencing the population of rhizogenic bacteria around tomato roots.”